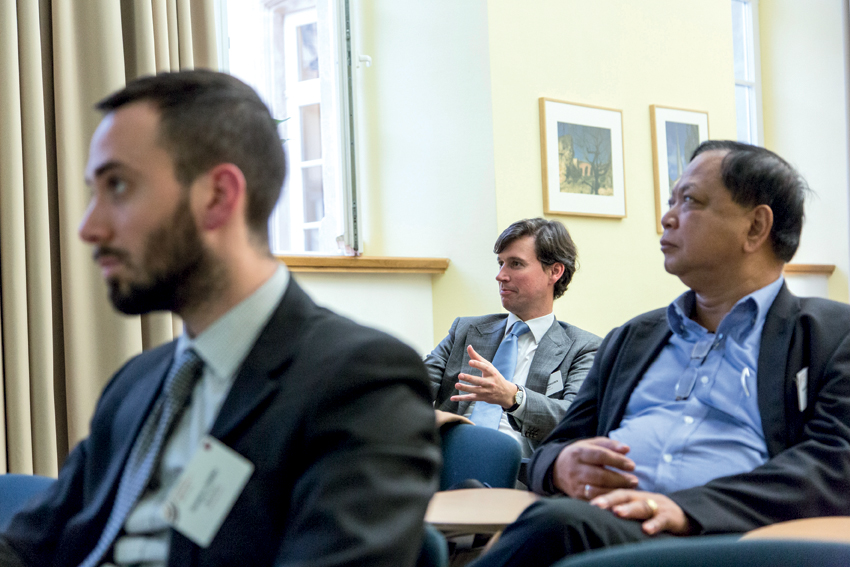 Noara KEBIR opened this session by proposing that it should be interactive and the audience was invited to generate the input for discussion.

Kebir introduced the work of MicroEnergy International (www.microenergy-international.com), an organisation which has been linking microfinance and green technology since 2002. She revealed that the sector is faced with a growing interest in this topic, which creates a pressure to develop more and more standardized tools and instruments, particularly with regard to capacity building.

The audience was then shown a video on a pioneer initiative on solar home systems of Grameen Shakti, implemented since 1996. Kebir commented that in 2002, when the video was made, around 500 solar home systems per month were distributed by Grameen around Bangladesh, a number which now has increased to 50 thousand per month, which essentially reflects the success of this model. She estimated that around 10 - 15% of the population in Bangladesh has access to green energy, but emphasized that an adapted political framework is essential for this transition.

A member of the audience questioned whether Grameen had been using the same model since 2002. Kebir responded that Grameen in fact developed a model in 1996 which basically consists of an integrated approach where the MFI has control over the whole value chain. She explained that it is a model of high impact, but its replication has been different in other countries, mainly due to legal and financial barriers. This model also requires a strong commitment from the MFI for the topic. Another question from the audience revolved around the dramatic decrease in solar panel prices in the last years, and how Grameen was able to make the model work cost-effectively in the past. Kebir agreed that solar panels have gone through a sharp price decline in the last years, but that the most expensive component of solar home systems is the battery, whose prices have in fact increased. She also explained that the problem is often not related to the total price of the system, but to the access to capital.

The next discussion point still addressed the issue of the replacement of batteries used in solar home systems, and how this is carried out and financed. Kebir explained that Grameen and other MFIs had a strong focus on the quality and quality assurance of the battery from the beginning of their initiatives. It was also emphasized that the battery is the most important element of the system, since it stores the energy. Kebir explained that energy storage is one of the biggest challenges of such initiatives, in terms of both lifetime and capacity. She also elaborated on the fact that clients take care of their own appliance, including water replacement in batteries. In addition to a user-friendly technical design, the users themselves receive regular trainings and acquire a sense of ownership. As Kebir explained, this creates social and technical intelligence into the business model.

The discussion also touched upon the issue of subsidies. Kebir explained that, for a long time, the Bangladeshi model was one of the few growing without subsidies. Although subsidies were introduced in 2002 and did contribute to strong growth of the sector, they are extensively used for quality insurance, the development of infrastructure and the establishment of new branches, and accordingly highly adapted to the requirements of microfinance.

Following the case of Grameen Shakti, Kebir introduced the interactive part of the session based on the strategic model of MicroEnergy International. She explained that, in order to implement the strategy, it is not enough to build on the capacity of MFIs; there is an international and national level of actors needed, as well as a strong emphasis on the role of consumers and micro-entrepreneurs. When looking at the case of Grameen, it is possible to observe that, not only are all actors needed, but they should comply with their specific roles in the system.

During the interactive activity, members of the audience were invited to place themselves within the MicroEnergy strategy, according to the stakeholders, which best reflected their role in the field of green microfinance. The outcome was that four main groups were formed in the areas of: 1) Financing, 2) Research, 3) Capacity building and 4) Technology. These groups were then invited to discuss with their peers what kind of training they would need in order to improve their operations in green microfinance. The group consisting of financing professionals expressed that their greatest challenge is to evaluate from a successful pilot if it is the right system, technology and market potential. In terms of helpful instruments, it was acknowledged that trainings could help to improve their operations, but it was noted that often MFIs are ahead of financing organisations in this respect, and that other technical capabilities might be needed.

A member from the audience expressed interest in knowing what the role of the government would be in this context, since the case of Bangladesh shows an important governmental role in the success of green energy projects. Another member of the audience commented that government can indeed play an essential role, as was the case in the Philippines, where strong coordination with a government agency facilitated access to solar lamps in disaster-prone areas. Kebir reminded the audience that, in the case, of Bangladesh, the government did not start the projects, which were essentially grassroots initiatives which did the right lobbying. Drawing from this experience, it was concluded that MFIs could profit from appropriate training in lobbying and in understanding the energy sector more deeply.

As a closing remark, Kebir referred back to the introduction of the session, when she mentioned the replication of successful models. On this note, she announced MicroEnergy's new bottom up initiative called "Swarm Electrification" which will be implemented by a subsidiary in Bangladesh called SolShare. Kebir said she looked forward to sharing more of this project and experiences in the near future.