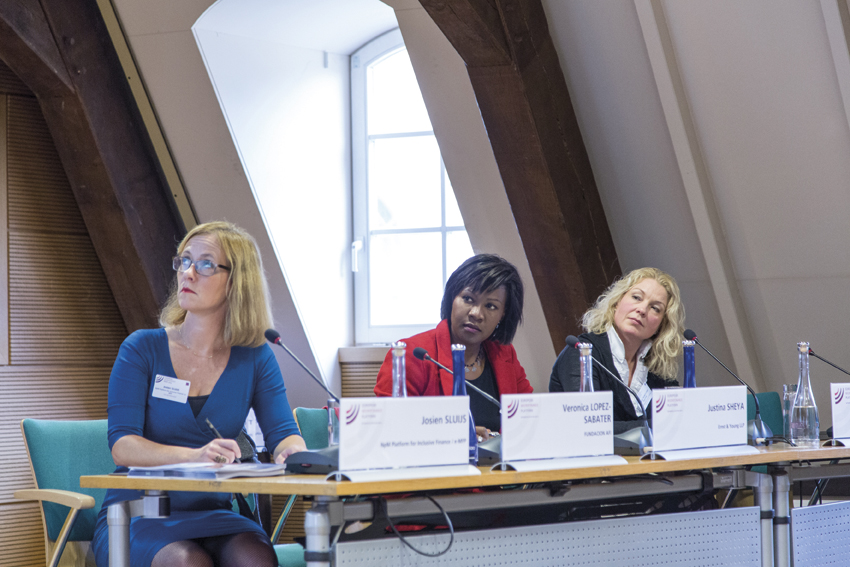 Josien SLUIJS opened the session by introducing the NpM Platform for Inclusive Finance, a Dutch organisation consisting of 14 social investor members. She then highlighted the theme of the session, emphasizing the relevance of law and regulation for client protection. Sluijs reminded the audience that the microfinance sector has been making several efforts in drafting principles for client protection, and highlighted that all these efforts need to be part of a larger picture. On this note, she explained that the session's presentations would revolve around the recently-launched research ‘Client protection in microfinance: The current state of law and regulation', conducted by EY and NpM, Platform for Inclusive Finance. The objective of the study was to determine whether law and regulation with regard to client protection have been implemented in different countries and whether these rules are enforced.

Marjola TREBELS-VAN BOLHUIS addressed the audience, explaining that she was involved in the pre-research phase of the EY-NpM study, in which the relevant questions for this research were determined. She explained that the first phase of the pre-research process was to conduct desk research on the information available on this topic, complemented by interviews with NpM members and third parties. These interviews were related to the importance of client protection principles (The Smart Campaign) to each interviewee and to see if there are gaps in research on rules and regulations that could be bridged. Regarding the most important principles, interviewees mostly named prevention of overindebtedness, transparency and responsible pricing, revealing that these are also the aspects of client protection needing further research.

Trebels-Van Bolhuis noted that one important finding was that most members interviewed were not specifically looking at law and regulation in their countries of operation. She also referred to two on-going studies regarding the issue of law and regulation on client protection, conducted by ACCION International and Jami Solli, emphasizing that there are other studies more indirectly related to this theme which are also relevant. Trebels-Van Bolhuis then proceeded to reveal this study's final research question: What does the law and regulation & supervisory landscape look like in the selected countries with respect to the client protection principles, in particular: over-indebtedness, responsible pricing and transparency? Where are these laws and regulations different for MFIs compared to regular financial institutions and how are they enforced? She also mentioned the final selection of countries: Azerbaijan, Bolivia, Cambodia, Ghana, India, Kenya, Peru, Philippines, Russia, Rwanda, Tanzania & Uganda.

Justina SHEYA started her presentation by explaining the involvement of EY in microfinance. She noted that, in addition to giving substance to microfinance's mission to better the world, EY has vast experience in the financial sector and in conducting research. Sheya then proceeded to present the results of the EY-NpM study which consisted of a very factual research conducted in twelve different countries, receiving the support of local EY staff who have contact with MFIs, Central Banks and regulatory bodies in the countries of the research. She reiterated that the scope was the regulatory and supervisory landscape of the selected countries in terms of client protection, particularly the following aspects: 1) over-indebtedness, 2) responsible pricing and 3) transparency.

Sheya mentioned that one of the conclusions of the study is that the rapid expansion of the microfinance sector into different geographies, and the establishment and development of many different institutions is noticeable in the law and regulation that govern this sector. Currently only seven out of the twelve selected countries have specific microfinance law and regulation. However, this does not necessarily mean that clients are better protected as these rules and regulations do not always address client protection.

In terms of regulatory bodies in place, she called attention to the key role of the Central Banks in developing law and regulation for the microfinance sector, also noting the role of other bodies such as insurance regulators in certain countries. Sheya commented that microfinance associations are active in developing regulation and are mostly involved in a consultative capacity, whereas consumer protection agencies are mostly not involved in the regulatory process.

In addition to sharing specific conclusions on over-indebtedness, responsible pricing and transparency, Sheya drew some general conclusions from the study. She commented that microfinance is still a growing sector, with a need for further improvement in terms of law and regulation. In addition, she concluded that law and regulation are important, but more effective in combination with financial education and self-regulation.

A member of the audience pointed out that, from field experience, it is not very effective to apply law and regulation for responsible pricing, mostly due to the competitive nature of microfinance in certain countries. The question was then extended to the most effective way of tackling overindebtedness. The topic of responsible pricing is a rather large topic on which many sessions and research have been organized. In the panelists' opinion, this topic cannot be solved by law and regulation; e.g. by simply applying an interest cap. But in the case of Peru, guidelines on this topic have been issued: ‘commissions or fees must involve the provision of an agreed service whose value is based on a real and demonstrable cost.' The same goes for overindebtedness, a very complex issue. The panelists were of the opinion that law and regulation in addition to financial education, should be a starting point to tackle this issue. Sluijs mentioned, however, that they have not included effects of law and regulation in this study.

Before starting her presentation, Verónica LÓPEZ emphasized that she was representing all members of remEX, the Spanish Microfinance Network. She explained that the operations of Afi (Analistas Financieros Internacionales) are focused on Latin America and North Africa, consequently this would be the scope of the conclusions she would present to the audience. López revealed that Afi believes that responsible finance should essentially be accompanied by a balanced regulatory framework in which the authority, industry and clients are involved. López also commented that, in addition to complying with regulation, the industry should also develop self-regulation practices.

López explained that, based on this three-legged stool framework, Afi conducted extensive work in Latin America in the field of law and regulation on client protection, cooperating closely with banks and financial institutions (FIs). By selecting a few benchmark countries in the developed world (UK, USA, Australia and New Zealand) and analysing the situation in Latin American countries, Afi came to a gap analysis on issues such as regulatory and institutional framework, supervision of regulation, handling of complaints and self-regulation. She elaborated that this gap analysis was used to draw general principles in a guide of good practices, which was approved by the Latin American Banking Federation. She revealed that this guide was piloted in FIs, serving as the basis for an action plan around five issues: financial education, transparency, responsible sales practices, complaints and privacy & security. Dramatic improvements were observed, especially in previously weak issues such as transparency and responsible sales practices. This methodology was illustrated with the case of Bolivia, which made important steps in the direction of client protection by creating more regulation and supervision for the microfinance sector, as well as making tools available for client awareness and security.

Sluijs closed this session by inviting the audience to visit the NpM website and access the ‘Client protection in microfinance: The current state of law and regulation' study. She also invited members of the audience to share their experiences on the topic of law and regulation on client protection, in order to create sector synergies and avoid overlaps.

I am taking back excellent memories