Raluca DUMITRESCU welcomed the audience to the first session on green microfinance and introduced the session's topic of green microfinance tools. Marion ALLET, senior microfinance environment practitioner for PAMIGA, presented an initiative which was started two years ago by the e-MFP Microfinance & Environment Action Group: The Green Index. The Action Group is aiming for a clear definition of green performance. The tool is designed to help MFIs understand where they stand in terms of environmental management. It is also useful for rating agencies and investors, since the tool can also be used to identify the differences in environmental sustainability between MFIs. Additionally, NGOs can use the tool to map the current situation for a gap analysis and future strategy.

The elaboration of the tool was a collaboration of multiple organizations from the microfinance and banking sector. It was developed building on existing tools created by researchers and practitioners, as well as on the result of a survey conducted by the Action group with 36 microfinance practitioners to identify the green microfinance practices most relevant to assess. Allet continued by explaining that the tool reflects all types of environmental strategies that could be adopted by an MFI. The index covers
1) formalized environmental strategy,
2) environmental risk management and
3) green opportunities.

The tool is meant to be used in a pedagogical way, leaving the user the option to pick some of these strategies over others according to his context of intervention. Answering the survey results in a graphic which shows the MFI's current position in relation to its desired position. Allet closed her presentation mentioning that the tool is still a work in progress. The tool has already been included into the new version of SPI4, but the Action Group invites the audience to give feedback in order to improve it further.

MicroEnergy International´s approach consisted of five steps, starting with a status quo assessment based on The Green Index that resulted in an evaluation. The next steps in developing a new green strategy for Contactar included the implementation and promotion of a Green Strategy, which was based on five pillars. The first pillar included its environmental policy, which resulted in the inclusion of Contactar's green performance in its annual report and green profile for impact investors. The second pillar consisted of non-financial services, emphasizing the environmental and economic benefits of green technologies and the use of preferential credit conditions for clients mitigating environmental risks. Ecological footprint, the third pillar, included a methodology for measuring the internal footprint and the reduction of water and electricity use and waste. The fourth pillar was formed by an environmental risk assessment of clients' activities. The last pillar of Contactar's strategy promoted the improvement of the green credit line by standardizing the technologies, internal capacity building and promotion.

Hatem MAHBOULI was asked to share the investor's perspective on the Green Index. As an investment officer at FMO, the Netherlands Development Finance Company, he explained that green financial inclusion fits the bank's strategy and finance ambitions. This has resulted in ‘green lines': credit line for on-lending to investments producing environmental benefits. Mahbouli explained FMO's approach to green microfinance, using a set of criteria to identify the product's potential. Mahbouli stressed that it has to be a win-win for financial institutions, suppliers and end clients, consisting of a clear business case.

Mahbouli explained that The Green Index helps investors. A high result for green opportunities is appealing for investors, as it proves that the systems for a green facility are in place. High scores for green strategy in the index show that management is committed to use the green facility. Environmental and social risk management is nice to have, but not a necessity from an investor's perspective. It shows that systems are in place for expansion into riskier clients. Mahbouli concluded that The Green Index is a good tool to raise awareness amongst MFIs and their partners, but questioned the need for standardization of the tool. In addition, he also put some remarks forward for The Green Index, raising the question on how much green portfolio is needed. Mahbouli also noted that the closed questions in the survey do not leave much room for MFIs to express their ambition and potential.

Geert Jan SCHUITE from Enclude provided the case of the Green Performance Agenda, which was developed together with HIVOS. The initiative developed a list of what MFIs can do to become more conscious of their impact on the environment. Schuite stressed that MFIs cannot do everything, forcing them to make choices by developing an agenda. The tool developed by the initiative has a 5-step approach: The approach starts with identifying the need followed by ‘speaking the green language' and the internalisation of the concept of green performance. This is then turned into action planning and evaluation to further improve performance.

Together with the African Development Bank and HIVOS, Schuite trained local consultants to improve MFIs' green performances in East Africa, Indonesia and Latin America. These programmes showed parallel streams. Financial institutions are more interested in risk management compared to smaller MFIs. Schuite defended that MFIs frequently struggle with a lot of things already. They do not have the capacity to include green performance on their agenda. However, MFI should keep in mind that donors and investors are incentives to consider this issue. Schuite pointed out that CEOs can be the drivers behind a green strategy. Clients can also be drivers since they are, according to Schuite, often impacted by environmental issues. 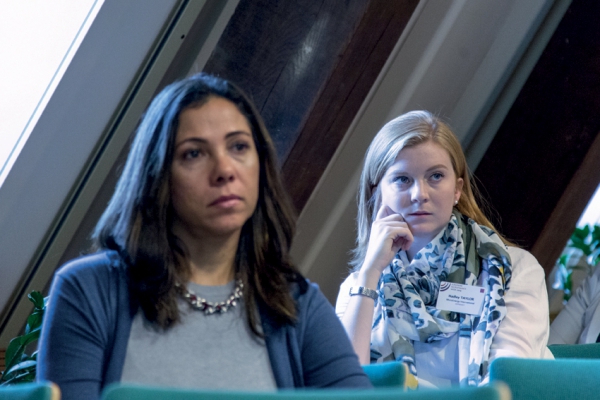 The discussion started with the question on whether MFIs that pursue the Green Index are offered additional benefits. Mahbouli responded by mentioning that preferably green financial products are kept commercial, but technical assistance is often offered at a reduced rate. The discussion then turned to the issue of weighting questions in the survey of the Green Index. The audience asked the panel whether some issues were more important than others. Allet responded that MFIs should not look at the scoring of the survey on its own, and should look at qualitative information as equally important. Weighting is currently not feasible due to the closed questions in the survey of the Green Index but may be considered in an updated version.

Another question revolved around the continuation of funding for the Green Index. Mahbouli answered that continuation of funding is still unclear, as green performance assessments are still in an infancy phase. However, he stressed that it needs to become a core business. The final discussion was about the certification of green finance products. The panellists agreed that certification is presently not a priority because the current tool focuses on creating awareness more than providing facts and numbers on the actual green performance.

Great attention to detail and the location is beautiful