Daniel ROZAS opened the plenary session by highlighting that client overindebtedness represents one of the greatest risks to microfinance, thus being a subject of extensive debate within the sector. Rozas then introduced the topic of overindebtedness and illustrated it with different examples from around the globe.

Rozas presented the case of Bangladesh, where microfinance experienced strong growth until 2007; between 2007 and 2008, the market overheated and reached a plateau. He also presented an IFC study investigating multiple borrowing in Morocco and its development over the crisis. He explained that multiple borrowing cannot be directly translated into overindebtedness, but that it does present a higher risk. It was observed that multiple borrowing in Morocco peaked in 2009, with 40% of the sector supported by clients with two or more loans, and who accounted for nearly half of all defaults in the sector. Rozas also mentioned Mexico, where multiple borrowing reaches remarkably high levels compared to other countries; in 2014, more than half of all loans in Mexico came from clients holding four or more loans.

Shameran ABED of BRAC presented an overview of the Bangladeshi microfinance sector in the last twenty years. He explained that microfinance started in the mid-1970s, and grew strongly in the 1980s. By 1990, microfinance was already covering the entire country, and it became a self-sustained sector. Abed mentioned that strong growth continued in the period 2003-2006, which started to create problems within the sector. In 2007-2008, multiple lending was already endemic in Bangladesh, affecting staff-client interface and cohesiveness of borrower groups. These issues led sector stakeholders to consider whether the quality of the sector was deteriorating.

In this context, MFIs decided to slow down and reflect on the status quo of the sector and their clients. Abed mentioned that this process was relatively simple since the sector was no longer dependent on donors. He also explained that the Bangladeshi microfinance sector started investing more on understanding multiple lending and client demand. Abed defended that multiple lending is not a bad thing in itself, but it should not lead to overindebtedness. Within the Bangladeshi sector, various efforts were made in the last years in making processes more flexible and in adapting products, so as to prevent clients borrowing more than their capacity to repay.

Youssef BENCHEQROUN, from Al Amana, then presented the case of Morocco, where microfinance began at the end of the 1990s. Bencheqroun explained that microfinance gradually scaled until 2007, with a successful 99% repayment rate and a risk portfolio below 5%. Bencheqroun mentioned that non-repayment cases increased substantially in Morocco from 2007 on. In 2008, the three largest MFIs, accounting for 95% of the market, merged and created an integrated credit bureau that established procedures related to risks. He clarified that the sector had not been exposed to risk prior to that point, with the result that the sector did not have the experience to manage risks. In combination with the Arab Spring, which made institutions more fragile, the sector slowed down in the beginning of 2012. Bencheqroun also explained that, due to cultural reasons, institutions in Morocco are not particularly conducive to microfinance. In this respect, he emphasized the need to explain and create awareness about microfinance in Morocco as a starting point to address overindebtedness.

Luis Fernando FERNANDEZ, from Pro Mujer, presented the case of Mexico, a highly competitive microfinance market. Mexico's banking system virtually disappeared from the country in 1995 due to the financial crisis, which made credit availability very low until 2000. Fernandez emphasized the strong promotion of credit by the Mexican government since then, calling attention to the widespread activities of Banco Compartamos in providing credits. He elaborated that microfinance in Mexico turned into a very commercial and aggressive sector, with very high interest rates. The microfinance sector was led by three banks present all over Mexico, creating a credit overload and focusing primarily on high returns. Even though he affirmed that there is a certain level of overindebtedness in the country, the exact numbers are unknown.

Fernandez emphasized that the financial focus of the microfinance sector in Mexico is changing, evidenced by the introduction of The Smart Campaign and a deeper analysis of the clients and their needs. He explained about Pro Mujer, which focuses on vulnerable groups and has a priority of providing clients with better financial and non-financial products, and in guaranteeing a high retention rate. This approach led to a two-digit growth in a highly competitive market. Fernandez defended that, by focusing on client loyalty and welfare, profitability will be a natural consequence.

Rozas questioned whether the large and commercially-oriented players in Mexico would recognize the overindebtedness issue in microfinance. Fernandez mentioned that the experiences of the other panellists show that market leaders can demonstrate different paths. He stressed the need to build leadership where social mission is a differential, which is a challenge in a country dominated by small groups of profit-oriented companies.

Rozas also addressed the role of authorities in managing client overindebtedness and wondered what the role of the Central Bank was during the crisis in Morocco. Bencheqroun explained that a new law in Morocco introduced a steering capacity to the Central Bank, with a dedicated department for the control of interest rates, which has been very useful to the market.

Rozas then observed that institutional regulators were not key factors in slowing down the microfinance sector in Bangladesh, and asked whether this initiative came from clients themselves. Abed clarified that regulators had not come into existence at the time of the slow down; it was an initiative stemming from MFIs and clients, reflecting the high level of sector maturity. He emphasized that overindebtedness will eventually hit the bottom line of financial institutions, even those which follow a commercial approach, and it is necessary to put processes in place to avoid it. 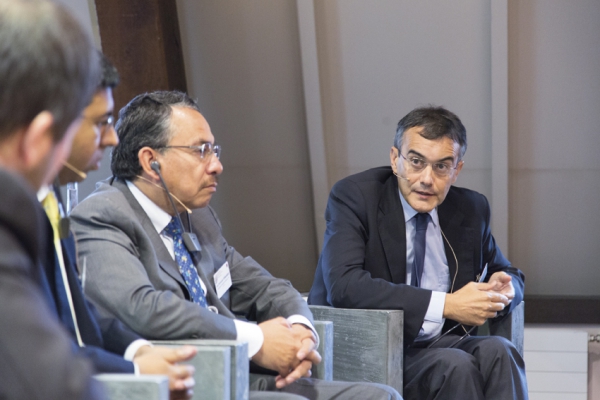 The panellists and audience discussed the role of impact studies in shaping the practice of MFIs and in creating client trust. Fernandez defended that impact studies should be used to develop products which cater for potential market segments, especially those which are financially excluded. Rozas mentioned that Jessica Schicks has conducted interesting research on how overindebtedness affects clients, finding that over-extended borrowers resort to sacrifices such as cutting back on food or taking children out of school, in order to repay their loans.

Another member of the audience stressed that we might be focusing on the ‘wrong side of the balance sheet' by dealing solely with credit. He defended that savings-driven institutions might actually be able to provide a product which is needed by the poor, since the poor cannot deal with interest rates. Abed mentioned that savings do play a role in Bangladeshi MFIs, but that the potential of credit should not be underestimated; it will always depend on how the client uses the money.

According to Abed, an overindebtedness rate ranging from 5 to 7%, as is currently the case in Bangladesh, is acceptable. However, it should not reach double digits. In Bencheqroun's view, however, overindebtedness should not be socially acceptable and should be restricted with proper policies. According to Fernandez, the focus is not on the market share of overindebtedness, but on individuals and whether they are able to repay their loans. He also mentioned that social MFIs should develop products to cater properly for clients and make use of the group effect.