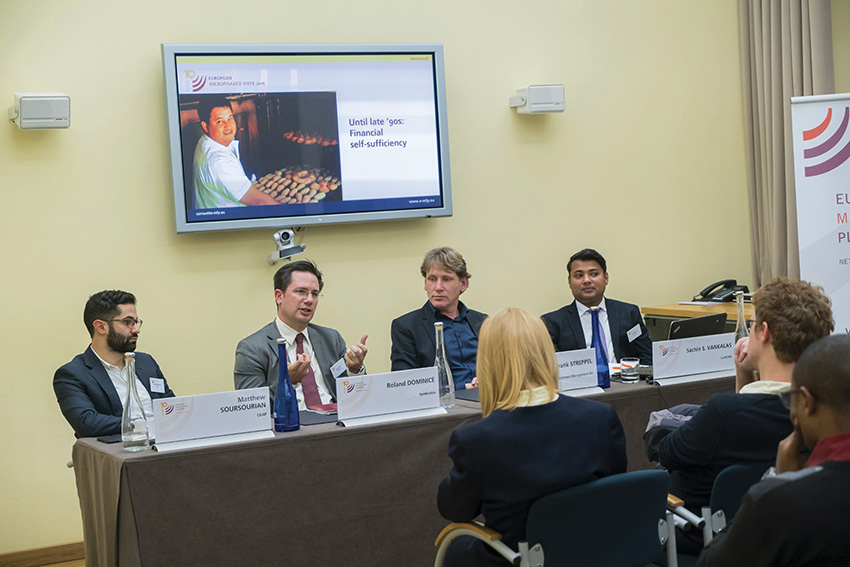 Sachin S. VANKALAS of LuxFLAG shared his expectations for the session: sharing developments in MIVs, identifying challenges and providing an outlook on the future looking at innovation and reaching impact.

Matthew SOURSOURIAN shared insights from the CGAP funding survey. He showed how funding for financial inclusion grew by USD 3 billion between 2013 and 2015, amounting to USD 33 billion. Public funders continue to dominate, with 72% coming from public sources. The majority of funding is still through debt funding, but he also identified an increase in structured finance. Most funding is directly provided to financial service providers, with a diminishing role of intermediaries. He closed the analysis by showing Europe and Central Asia is still the most funded region but that Sub Saharan Africa has now surpassed Latin America and South Asia.

MIV disclosure guidelines have helped increase transparency and comparability in reporting by MIVs, based on which CGAP has been able to conduct an increasingly insightful and representative survey of MIVs. From 2011 onwards, the survey has been conducted by Symbiotics.

Roland DOMINICE then shared that the survey now covers 95% of MIVs in terms of volume. The industry grew from USD 2 billion in 2006 to USD 11 billion today in 2015. Average growth amounted to 20% over the last 10 years. Early years showed a particularly strong growth, slowing down to a current 15%.

Although many MIVs operate in the market, the importance of large funds (plus USD 250 million assets under management) has grown (62% of total assets). He also showed how debt finance continues to dominate, but that equity funds now account for 10% of the total market size, up from only 3%. In terms of regional focus, strongest growth occurred in the MENA region, although absolute volumes remain low towards that region, with Latin America and Eastern Europe and Central Asia still accounting for the largest shares in total funding. He noted that the latter showed a decrease in 2015 because of US and EU embargoes of Russia and plummeting oil prices, while South Asia picked up strongly because of a more conducive regulatory environment in India. He then showed Luxembourg as the prime MIV jurisdiction, followed by the Netherlands. Funds registered in both these countries represent today respectively 61% and 21% of all MIV assets. Institutional funding has become the main funding source of these MIVs, accounting for almost 50% of funding. Data on net returns on debt and expenses showed a comparatively stable net return of 3.3% over the last 10 years.

He then turned to indicators which provide information on impact, showing an increase in clients served by MIV-funded MFIs to 24 million. There was an even ratio between rural and urban clients, while the percentage of female borrowers stayed stable at around two thirds of the total number of borrowers. He also showed a stronger focus on environment and client protection among the funded MFIs.

Frank STREPPEL, of Triodos Investment Management, reflected on the evolution in the microfinance industry relating to different expectations, language and tools. A first evolution was from microfinance as a social initiative aimed at poverty alleviation, until the early ‘90s, to one where it was expected that MFIs became financially sustainable in the late ‘90s. As a result, the industry became a commercially viable asset class. Strong growth resulted with investors coming in. At the same time, unrealistic expectations of microfinance persisted: solving poverty while offering highly attractive yields to investors. As these expectations became increasingly dispelled, microfinance is now increasingly becoming an integral part of the financial sector as financial inclusion. In this sense, it facilitates other development areas such as education, housing or rural development.

Streppel sees both challenges for MIVs in terms of pressure on yields, increased risks and costs (FX risk, PAR, legislation) and excess liquidity in the market. However, he also identified positive developments in terms of diversification in the product offer, investments in supporting infrastructure and leveraging on ICT developments. For the future he calls for a more effective role of public funders in supporting innovation and more transparency of impacts in terms of employment creation or income improvement. Public funders are too often offering funding sometimes at conditions that do not adequately reflect the risks associated with it, resulting in inadequate realization of development objectives and crowding out private funders.

The discussion turned to what a realistic impact is for impact investors. Dominicé stressed impact investors ensure that funding becomes available to innovations or market segments which normally remain unfunded. He also mentioned Symbiotics social charter with financial, environmental and social criteria that guide towards investing for impact, but added that their measurement focuses on outreach, not outcomes in terms of jobs created. Streppel explained Triodos’ scoring methodology, looking at risks but also sustainability. He believes in supporting an investee to improve impact, but also mentioned minimum standards before funding can be provided. He also added that as a sector, we still have a way to go in harmonising terms of reporting, auditing, due diligence and governance expectations. Such inefficiencies are eventually paid for by the users of microfinance products.

When asked about the reduction in SME funding in the MIV survey, Streppel focused on the fungibility of money. Is funding really more often for consumption or is it just better reported. Moreover, can we always assume funding SMEs is more effective in terms of reaching impact? He explained that many SMEs are a last resort for people and there is often a lack in entrepreneurship to support growth.

Vankalas then asked the panel to make a closing remark on future developments in the sector. Streppel mentioned the integration of microfinance as an enabler to broader development goals. In this sense he called for practitioners to rethink how funders shape the relation with their investees and remain a value-added partner. Dominicé expected an increase in funds and volumes but also sees a strong development in the supporting industry, such as deal structurers, brokers, liquidity management facilities and research and analysis firms.