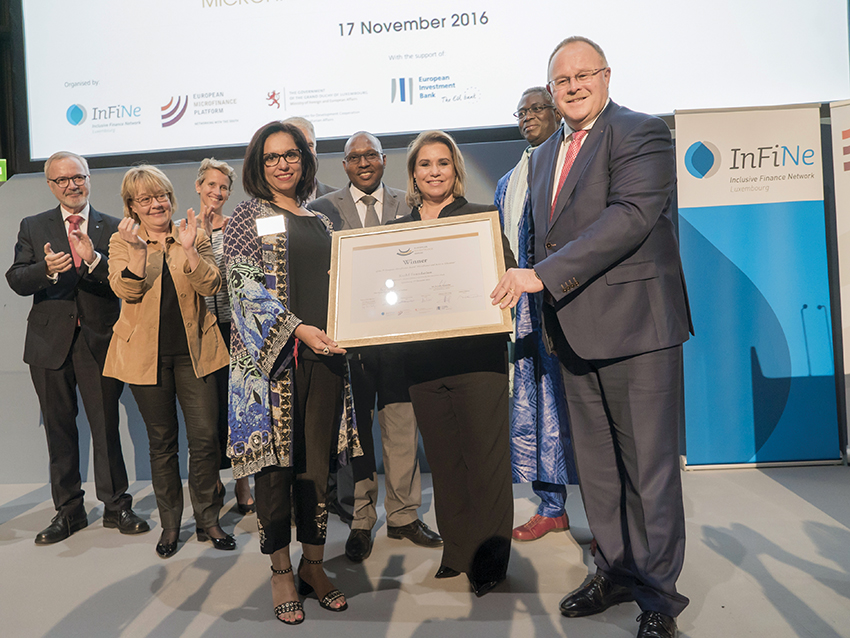 Kashf Foundation was announced as the winner of the 7th European Microfinance Award by Her Royal Highness The Grand Duchess of Luxembourg at the ceremony at the European Investment Bank on 17th November 2016. Kashf was recognised for its support of low cost private schools in Pakistan with a dedicated credit product, coupled with teacher and school management training.

Beginning the ceremony, Werner Hoyer, President of the hosting European Investment Bank, welcomed everyone with a stark message – that on education, we have largely failed. The Millennium Development Goals finished in 2015 (to be replaced by their successor Sustainable Development Goals - SDGs) and missed the target of universal access. In 2013, 59 million children of primary age remained out of school worldwide. 1 in 5 had dropped out. 2 in 5 would never set foot in a school. The SDGs, he said, explicitly recognize that this gap must be closed. In 2013, there were 757 million people aged 15 and over unable to read or write – two thirds of them women. 1 in 10 girls were out of school (compared to 1 in 12 boys). The poorest quintile are four times more likely to be out of school than those in higher income bands. “Missing by such a large margin is a shame on us”, Hoyer said.

And it should be so obvious. “Education is the best investment; there is nothing in the world which benefits [people] more than additional years of schooling”. And Luxembourg is at the forefront of this, with various partnerships between the Government and UN bodies, and over Ä 30 million in the Luxembourg Development Fund, earmarked for this.

Anthony Lake, Executive Director of UNICEF spoke via video message, and echoed Hoyer’s theme – that we know about the impact of education but we are not acting sufficiently on what we know. “Shockingly, 130 million illiterate children spend only up to 4 years in school. This means more poverty, an unequal playing field, perpetuating cycles of poverty and disadvantage, and fomenting civil unrest…we cannot make a better world unless we invest in quality education - especially for the most disadvantaged… in low income countries, richer children get 18 times the public investment of poorer areas’ children”. More government investment, and more innovative investment, is needed, he said.

Moving films documenting the three finalists’ education access programs were shown, before Romain Schneider, Luxembourg’s Minister for Development Cooperation and Humanitarian Affairs took the stage to detail the various work the ministry is doing. But, he argued, while Awards are important and excellence among the candidates should be recognised, we should not lose sight of who really we are focusing on. “We already have a winner tonight – the children and adults who have better access as a result of these projects, and those of all the other worthy applicants”.

Minister Schneider welcomed Her Royal Highness The Grand Duchess on stage who described how she was honoured to be invited to again chair the High Jury, and how important the role of micro-finance can be in driving education access. There remains much to be done in working to achieve the SDGs, she said, and that while enrolment has gone up globally, and illiteracy has declined, there are quality issues, including with the plethora of often-underfunded private schools around the world. “But I am confident that inclusive finance has the way forward, and education and microfinance is an important partnership for peace”.

With the announcement of Kashf Foundation of Pakistan as the winner, Her Royal Highness invited the institution’s Founder and Managing Director Ms. Roshaneh Zafar on stage to accept the Award. Ms. Zafar said that especially in Pakistan, with its entrenched cultural patriarchy, education can be a huge equaliser. A woman who is earning money is 45 times more likely to send her children to school, and education plays an enormous role in reducing the prevalence of forced and child marriages. So education access, especially for girls and young women, is a key part of the organisation’s mission. Kashf has “a special commitment to ensure all women and girls have every opportunity to develop their innate potential… and become leaders of tomorrow”.