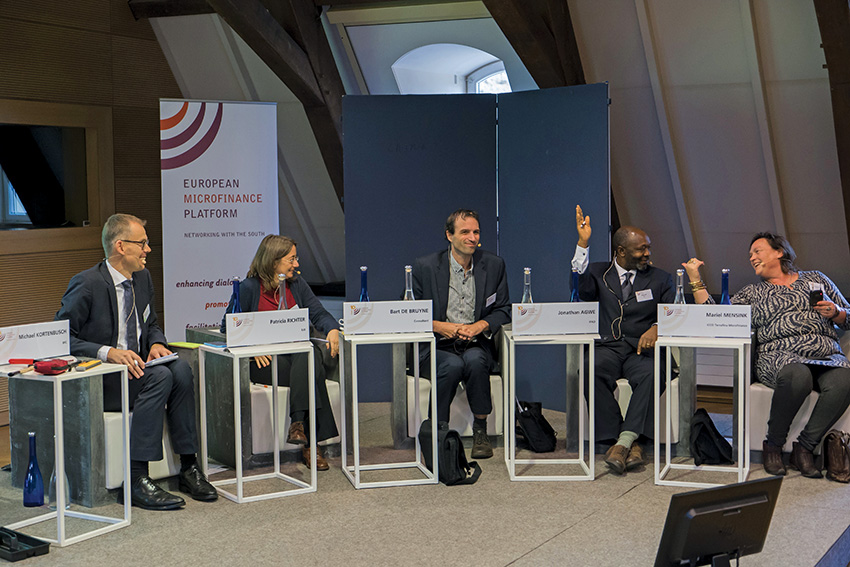 Mariel Mensink continued by sharing her experiences of working with corporates in value chain finance within the scope of public private partnerships (PPPs) promoted by the Dutch government to strengthen Dutch businesses in the South. These show that finance is critical not only for smallholders but also for other actors in the value chain. Yet finance is often forgotten in the programme design of PPPs. Mensink presented the cases of Heineken and Fairtrade International. In both examples value chain finance turned out to be critical for success. In the case of Heineken, the company hesitantly decided to provide financial services to actors in the value chain, but later realised it was actually pushing out financial service providers that could provide value chain finance to these actors. Fairtrade International is supported by the Triodos Sustainable Trade Fund for its finance needs in the coconut value chain. The fund pre-finances sourcing and processing of coconut milk so that the exporter can fulfil its export contracts. The payment is then guided through the fund which deducts loan repayment and interest payment. This model is however not feasible with smallholders.

Bart De Bruyne presented warehouse receipt lending systems based on his experiences in Mali, Burkina Faso, Rwanda and Burundi. In these systems, securely stored harvest of non-perishable agricultural products with foreseeable price fluctuations are used as collateral for loans. His cases showed considerable advantages for both producers and MFIs, in line with the classic warehouse receipt lending insights. Smallholders have access to credit, can make informed sales decisions and have improved food security as the harvest remains in the village. On the other hand, MFIs can benefit from more secure collateral, better repayment rates and penetrate rural areas more effectively. De Bruyne underlined risk management issues, such as governance fraud, market and conservation risks, and social performance issues. Special attention is needed to make sure that producers also profit from the price speculation. Operational issues are around sound task divisions between actors.

Jonathan Agwe presented the case of value chain finance by hotels with Crop-in-the-Field as collateral to raise appetite for agro insurance in the Seychelles. The Seychelles economy is dominated by tourism. The sector expressed a need for a larger domestic food production as 95% is imported. However, many smallholders were not able to receive loans, as land tenure is regulated through public leases of 5-10 years. As such, the land could not serve as collateral for smallholders. This led to a state-led intervention aimed to increase local food production. After a revision in hotel classifications, the government obliged 5-star hotels to source 20% of their food locally. At the same time smallholders were clustered to gain scale and the desire to develop innovative inclusive financial products responding to their local needs, inadvertently resulted in smallholder farmers of niche crops, securitizing cash advances from high end 5-star hotels with Crop-in-the-Field. Niche crops like tiger fruit and pawpaw on the farm were used as collateral to access financing from the off-takers. Now that increasing demand for high value perishable local produce is triggered, the next unintended and growing demand is for adequate microinsurance to cover such high value but perishable niche crops, as well as their buyers.

Patricia Richter elaborated on the need for insurance, as was mentioned by other panellists. She presented how you can build scale with insurance products by bundling them with financial and non-financial services. Insurance is in many cases important for the poor as protection against setbacks during production or sales, but can also allow people to access credit for riskier farming activities which would otherwise not be possible. However, insurance remains a difficult sell to the target group as it may never have any pay-out. As a result, many farmers do not use insurance which undermines efforts to reach sufficient scale. Bundling insurance with other products could solve this issue. Richter then explained several options for bundling across the value chain, such as bundling with agricultural inputs, support services or other financial services. Although there will remain risks in bundling insurance, bundling makes insurance more tangible and can improve value for all actors.

The audience noted that the examples presented by Mensink had a top-down approach and questioned whether these approaches can also be bottom-up. Mensink responded that bottom-up approaches are possible, presenting a case of Heineken in Burundi. Another participant asked about the response of actors in the value chain after Heineken announced it would stop providing cheap loans. Mensink responded that Heineken’s suppliers accepted the change as they noted that the loan products of Heineken were in fact not much cheaper as those of other financial service providers as the their revenues turned out to be lower.

A participant in the audience mentioned that the dual key warehousing is typical for Western Africa. Other systems with third actor conservators, in his experiences, have not been very positive due to higher storage costs equal to an interest increase of 1-3%. De Bruyne responded that in the presented traditional cases storage costs were about the same, namely between 2% and 4% of the stored value.

The audience questioned the technological challenges linked to insurance in rural areas. Richter explained the basic functioning of weather stations and satellite imaging which are increasingly being used in product costing and claim verification. A final contribution from the audience concluded that value chain finance is focusing on sharing benefits but questioned whether it should also share risks by partly compensating insurance costs. De Bruyne replied that it would be better to focus on risk mitigation at farmer level as forcing MFIs to pay for insurance will only increase loan costs.