Assessing and promoting social performance in Europe, exchanges and lessons learned from the South 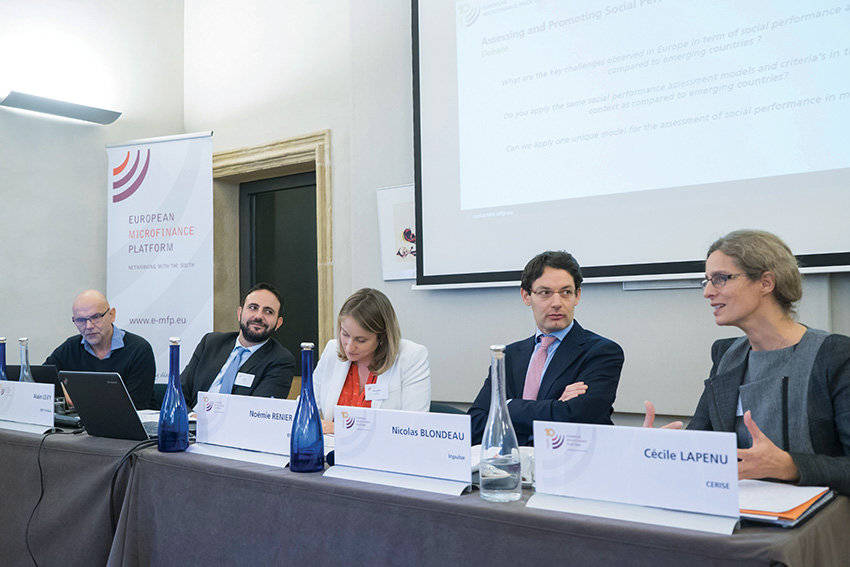 Noémie RENIER kicked off the session by stating that microfinance is recognised as an essential tool for economic growth and social cohesion in Europe. While an estimated 60% of European financial service providers (FSPs) are tracking and monitoring social performance according to EMN Survey, there is no standardised approach evidencing further need for alignment and transparency on social performance management in Europe. The European microfinance sector is a very heterogeneous market with many different business models of microfinance services and providers. The main question of the session was how to standardise the way we measure social performance while addressing the various socio-economic challenges of European markets. Renier introduced the European Investment Fund (EIF); established in 1994. EIF is a specialist provider of risk finance to benefit small-medium enterprises (SMEs) across Europe. EIF’s primary goal is to enhance SMEs access. EIF has been active in the microfinance sector since 2000 providing funding, guarantees, and technical assistance. Tracking social performance of FSPs is of utmost importance for EIF which has been developing internal monitoring and reporting systems, more recently in partnership with CERISE.

Cécile LAPENU stated that social performance management (SPM) is beneficial for better impact and better financial performance. She explained briefly the history of CERISE and the creation of social audit tools for MFIs, the SPI, and SPI4 tool, the latter being completely aligned with the Universal Standards, and ALINUS, a tool for investors. EIF has worked with CERISE on the development and implementation of a social performance assessment tool that takes into account the heterogeneity of the European microfinance sector and the fact that the sector is much regulated. The goal is to align to the Universal Standards in social performance assessments while addressing specific socio-economic challenges of European markets and EIF’s investment strategy as well as link to the European Code of Good Conduct. CERISE and EIF have created an Excel assessment tool for MFIs to conduct self-assessment via interactive workshops to select the key indicators.

Nicolas BLONDEAU briefly introduced Inpulse, an impact driver fund management company that has been financing social economy, cooperatives and MFIs for more than 20 years. It has two main funds: CoopEst, financing debt and sub-debt in Eastern Europe and Caucasus, and CoopMed, financing debt and sub-debt in the MENA region. Helenos will be launched in 2017, and will finance equity in Europe and focus on small and emerging financial institutions targeting micro-entrepreneurs and social enterprises. Inpulse has developed a tailored social performance management tool called SPA, which is based on SPI4 and divided into four categories: social mission, access and outreach, products and services, and staff treatment. SPA is fully integrated in the different phases of investment from due diligence to monitoring and reporting.

Alain LEVY introduced BNP Paribas which is funding MFIs and provides tailored support and technical assistance. They are serving MFIs in both developed markets in Western Europe and emerging economies in the rest of the world. Their microfinance social target is to increase the number of their beneficiaries from 250,000 in 2015 to 350,000 in 2018. Levy explained that they are building a social impact methodology where their entire social portfolio is dispatched in seven social action clusters, with one of them being ‘microfinance and support to entrepreneurship’. Their indicators answer the three questions: 1.) Who are the beneficiaries targeted? 2.) What are the achievements of the social business? 3.) What are the results/effects on the beneficiaries? A social impact performance report is published every semester.

Grzegorz GALUSEK introduced Microfinance Centre (MFC), an international microfinance network with 105 members in Europe and Central Asia that has been working on SPM for over 15 years. MFC’s work on SPM came as a reaction to the commercialisation of the microfinance sector in the early 2000s. MFC is supporting over 90 MFIs and 30 national associations through its Social Performance Fund to implement and promote SPM by providing technical assistance and trainings on data collection and analysis. According to MFC’s experience, typical western MFIs are more socially oriented than their eastern counterparts. Lessons learned from European MFIs is that first of all, interest from regulators and investors on social performance is key to build long-term social performance commitments within the MFIs. He added that coordination among key players to have a common set of social performance standards is important, and that the sector should build on existing experience, tools, and lessons learned.

Renier asked Levy whether some social indicators are more or less relevant to the European market. According to Levy, BNP Paribas applies optional indicators when assessing social performance which can be used according to local context in order to improve relevancy. Lapenu mentioned that when assessing FSPs in Europe, CERISE started from the SPI4, although some sections were deemed less relevant to the European market because of prevailing regulation, for example with respect to labour law. Within Europe, FSPs may also be looking at indicators from different perspectives, for example when it comes to portfolio at risk or customer retention. She stressed however that key challenges for the microfinance sector remain the same, regardless of the context. She agreed with Levy that the use of optional indicators, adjusted definitions and indicator weights can help tracking different FSP’s profile with a standardized tool. All panellists agreed on the added value of developing a harmonized approach when assessing social performance in Europe, in order to reduce the reporting burden for FSPs while leveraging on the existing technical tool available namely on the Universal Standards.

Renier asked whether investor’s tolerance in terms of portfolio quality varies across Europe, looking at impact in social inclusion vs. financial inclusion. Levy highlights indeed the different appreciation of such a concept between emerging and developed markets. Where we observe stronger welfare states such as in Western Europe, FSPs might play a stronger public policy role and hence develop more risk appetite. Yet a subsidized approach might cause market confusion and hamper the development of a sustainable microcredit sector. Galusek agreed that the availability of subsidies relaxes the constraints when it comes to portfolio at risk.

The conversation then shifted to the role of regulators in promoting SPM. According to Lapenu, Universal Standards can help regulators identify key issues. Alan Moore, ILCUF asked whether the increased financial regulation of the sector can impact social inclusion negatively. In some cases, FSPs work with better-off clients because they are pushed to focus more on financial sustainability by regulators, especially after the 2008 financial crisis. Galusek noted that there is an increasing global trend for business and corporations to seek social value in what they do. He is optimistic that social inclusion will be the focus of all regulators. Levy added it is not only up to regulators to promote social performance. All stakeholders have a role to play, especially investors and funders. Lapenu added that the sector should find the right balance of financial protection and social inclusion. A final question from the audience asked how to embed SPM in FSPs that lack a social performance culture. Lapenu stressed the importance of involving board members and senior staff. Galusek added that although there is a learning process, regulation can accelerate culture awareness.