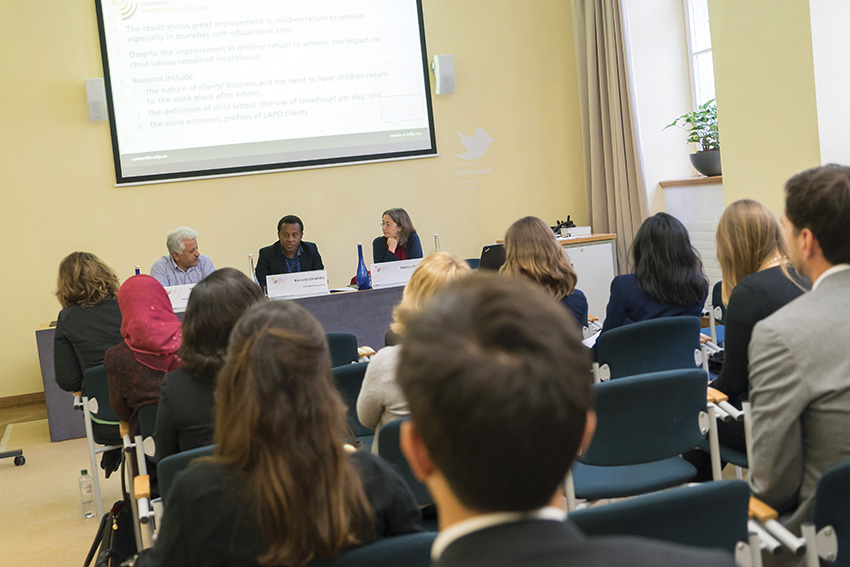 Richter explained five causes for child labour: demand, social norms, costs & quality of education, vulnerability, and income poverty. She then described possible interventions of MFIs for all five causes. These include awareness campaigns to change social norms or financial services to make households less vulnerable for income and expenditure shocks, such as savings, insurance or emergency loans. Richter introduced the Microfinance for Decent Work Action Research Programme of ILO that aimed to measure the impact of decent work innovations on the welfare of micro­finance clients, including effects on child labour. Both panellists participated in this programme.

Okakwu then presented the results of the programme on child labour: there was great improvement of children returning to school, especially for branches with educational loans. However, the results on child labour were inconclusive. Okakwu explained that awareness will go a long way to improving the incidence of child labour especially among the poor clients and that this would take continuous awareness and a long time. Among LAPO’s clients it is still very common for children to join their parents at work.

Muhammad Tahir WAQAR explained that the majority of NRSP’s clients are poor, with incidences of child labour. NRSP does not work with the bottom poor where child labour is expected to be even higher. NRSP aimed to reduce child labour incidence and improve social safety nets for its clients by adapting their micro­insurance product for health and death. The coverage for this insurance product was expanded to all of a client’s household members. NRSP increased client education on insurance and child labour issues. To compare the results, NRSP also had control branches where no changes were made.

During the programme, the incidence of child labour reduced significantly, but there was no evidence that schooling increased at the same time. This effect was stronger for boys than for girls. Waqar also pointed out that NRSP had found a possible sustainable financial product that reduces child labour and is financially attractive for the MFI.

Richter asked the panellists what post-intervention steps and challenges they identified. Okakwu described that during the project demand for a child savings product increased. LAPO developed a Child Welfare savings product in addition to the educational loans to accommodate this demand. LAPO’s saving portfolio improved by 18%. The project identified a gap in financing non-formal learning. To improve this situation, LAPO developed a skill acquisition loan to support tuition fees and start-up packs. LAPO also developed a scholarship for tertiary education.

Okakwu described four main challenges to reduce child labour among LAPO clients that were identified during the project: definition and measurement of child labour, social class and nature of clients’ business, monitoring of intervention is limited to loan usage, and cost of funding loans for intervention. He concluded that the combination of an awareness campaign, educational loans and scholarships decreased the incidence of child labour and had a positive result for the MFI.

Waqar explained that NRSP shared the research results with other MFIs and rural support programmes. NRSP also advocated for health insurance products with the government. The Pakistani government launched a similar product nation-wide, which was facilitated by NRSP. Waqar warned that the microinsurance product by itself is not a viable business case for an MFI, it needs to be combined with other microfinance products to be sustainable.

A member of the audience asked if the panellists found a gender difference in their studies. Waqar answered that the results of the NRSP health microinsurance product were slightly higher among boys, as child labour was also higher for boys. In Hyderabad, education levels are higher among girls than boys. He also stated that their results are biased as many girls still work at home, these forms of child labour are not included in their research. Okakwu explained that in LAPO’s research, the effect on child labour was stronger for girls. However, the main reason for this was that over 90% of their clients were women, who involved their daughters in their work.

The audience questioned the panellist on the effectiveness of health microinsurance products to reduce child labour. Will it not increase child labour if parents know that their children are insured for health care? Waqar explained that children are often put to work if their parent falls ill to prevent a loss of income. With the insurance product, there is no need for children to go to work. He also explained that a household in Pakistan does not only exist of one family, but can include several families. By covering all household members, the impact of the health microinsurance product increased.

Another member of the audience asked how the education loans were funded. Okakwu explained LAPO funded the loans, and that the costs are a growing issue. The interest of these loans has increased slightly, but LAPO does not want the interest to increase too much as they want the loan to be available to many clients.