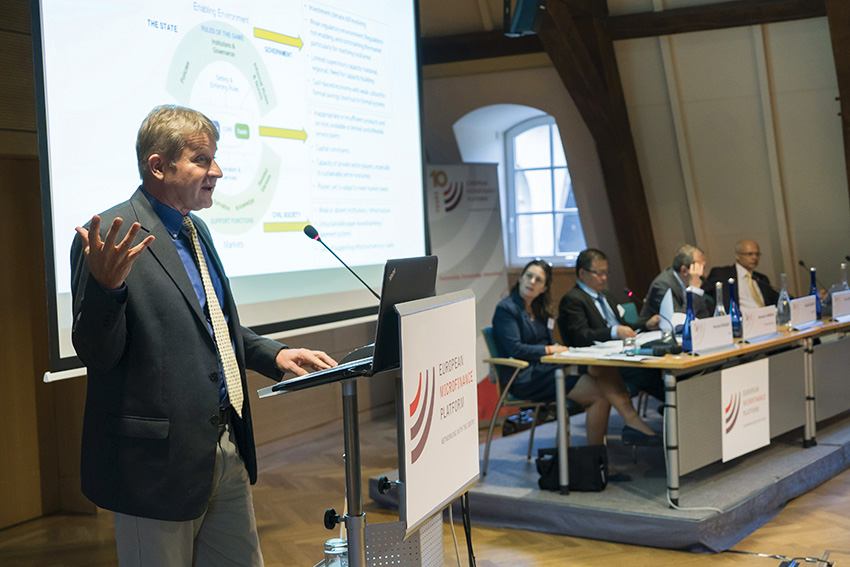 Perrine POUGET kicked-off the session with the question: “Is Myanmar a golden land for microfinance?” There are many opportunities to be found for investors, but challenges also abound. How can we leverage these opportunities while dealing with challenges in a responsible manner? She provided the context in Myanmar: A low GDP and HDI, a dependence on the agricultural sector, and a legacy of defunct financial institutions and infrastructure left by the dictatorship which its first democratic government is working hard to overcome.

She then gave the floor to Paul LUCHTENBURG, country coordinator of UNCDF. Luchtenburg provided an overview of Myanmar’s microfinance sector. He stressed the strong desire to move ahead in the country, with a government eager to learn and prove itself, but also high expectations of the population. The country is among the fastest growing economies in the world. The lifting of sanctions by the European Union (EU) and the United States of America (US) and new legislation is expected to bring further progress and increase foreign investments. On the other hand, the weak financial infrastructure, continued macro-economic and exchange rate volatility and inflationary pressures plague the economy.

Even though there is strong willingness to learn and improve, barriers to financial inclusion abound. In terms of the enabling environment, Luchtenburg identified weak regulation, limited supervisory capacities and low trust in the financial sector. He also identified a mismatch in supply and demand with inappropriate products, capital constraints and low capacities of financial institutions, in particular to serve rural areas. He also mentioned ineffective payment systems and a continued reliance on paper-based banking.

He explained how the 2011 Microfinance Law led to a rapid increase in the number of institutions with microfinance activities to 267. This number went down to the current 167 MFIs as many cooperatives surrendered their licenses.

Sanjay SINHA started the discussion by sharing his perspective on the demand for microfinance in Myanmar and its legal system, level of entrepreneurship and trust in the financial system in comparison to other countries. He agreed with Luchtenburg that the microfinance sector grew quickly to meet demand when the market opened up. Many institutions did not understand microfinance and focused on simple credit services without answering to the needs of entrepreneurs, rural populations and in particular, the important agricultural sector. He also mentioned access to funding and low capacities at the supervisory and regulatory bodies as key challenges. Capacities for proper loan appraisals at MFIs are also insufficient.

Rommel CARINGAL of VisionFund Myanmar identified additional challenges. He shortly described the development of VisionFund in Myanmar, starting as a development programme providing financial services and evolving into an MFI after 2011. The transition into a formal financial institution was difficult due to unclear regulations, limited capacities and constrained access to funding. On regulation he underlined that rules are often unclear or contradictory. For example, government maximum cap on interest on credit and minimum cap on savings contradict with requirements to be sustainable and service rural areas where large investments are needed. In terms of human resources, current demand for high quality loan officers and other staff far outstrips supply. Big investments are needed to train those who do not have such capacities in order to sustain growth. Lastly, he described how government caps on interest rates and lengthy approval procedures for funding constrain access to funding. Moreover, international investors remain cautious to invest in Myanmar.

Pouget then asked Claude FALGON to explain why Advans invested in Myanmar and what models they employed. He mentioned several conditions to be met before Advans enters a market such as a large underserved population, an acceptable legal framework and a sufficiently large population to allow for a return on investments. In its greenfield model, Advans normally starts by providing MSME credit and collecting deposits in urban areas in order to build infrastructure and capacities, before branching out into rural areas. As they could not use a deposit-driven funding model and were faced with capacity gaps, they developed a low-cost green fielding model focused on simple credit products (e.g. small, short-term loans), with low capacity demands for loan officers to rural clients. This strategy aims to quickly break even before external funding can be attracted to expand into other markets (urban, SMEs). Pouget further mentioned the high reimbursement commitment among lenders in Myanmar but also stressed the low level of professionalism and poor supervision of MFIs in the country.

Luchtenburg continued with interventions of UNCDF in terms of the business enabling environment. Pouget had some concern for a credit bubble in urban markets while rural outreach remains financially unsustainable in the current regulatory environment. Based on a mapping exercise, UNCDF worked on a financial inclusion road map with government to come to a systematic approach to develop the sector. Furthermore, to overcome the lack in local currency funding and affordable hedging options, UNCDF set up a market development facility to provide local currency funding and develop interventions for a more favourable climate for international investors.

Caringal then shared VisionFund’s strategy for rural outreach. While 70% of clients are rural, they only represent 20% of the credit portfolio. VisionFund is committed to expand its rural portfolio, taking advantage of best practice models from similar markets like Cambodia and taking a value chain approach to reach scale and reduce risks. There is a strong need for appropriate services by the agricultural sector, such as agricultural insurance. Caringal also pointed to opportunities to leverage the telecom boom in Myanmar by offering mobile banking services. He saw potentially good opportunities to reduce costs and improve outreach in rural areas.

The discussion then turned to the issue of competition and whether consolidation can be expected. Sinha did not see a strong reason for consolidation from the demand side as there is still a large untapped market, but difficulties with raising debt, equity or deposits could lead to some consolidation in practice. Falgon added strong resistance to consolidation among market players.

The panel was then asked to provide further insights into capacity building and possible synergies between interventions. Sinha mentioned an IFC initiative, managed by M-CRIL, to build capacities of MFIs and earlier programmes of the World Bank to train supervisors. He stressed that more regular follow-up is needed to make training effective. Falgon added that training on loan appraisals and MFI systems is the responsibility of individual institutions, but that synergies exist for training in soft skills, or issues such as risk management. Although staff turnover is currently large across the sector, Caringal added, pressure will taper off as more skilled staff is trained, offering strong grounds for capacity building, for example through exposure visits and leadership training.

In conclusion, the panel agreed that Myanmar offers strong opportunities for microfinance investors. Investors need to be in for the long haul and willing to invest in capacity development, infrastructure and systems. Furthermore, patience is needed as the regulator is still learning in terms of developing an appropriate legal framework and building the governance capacities to supervise the sector. Investors need to be willing to develop partnerships to address issues in the business enabling environment.