Atlas data platform: A new one-stop-shop model for the sector 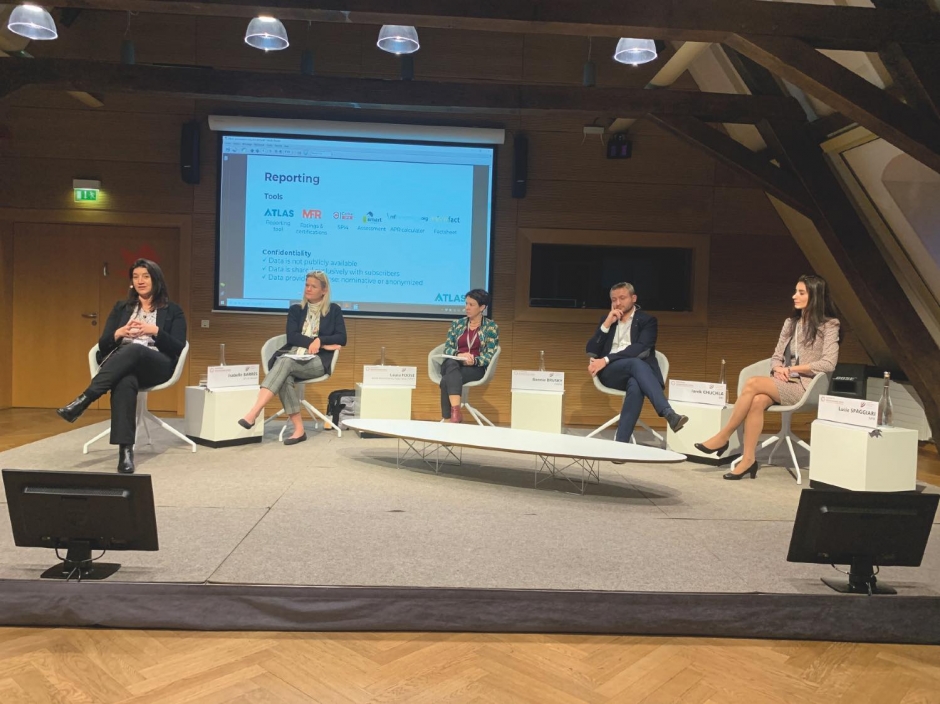 Laura FOOSE was delighted to open the session with a true partnership aimed at harmonising practices in data management. ATLAS is benchmarking across borders to establish universal standards; it offers a platform and one-stop-shop for financial service providers to report, benchmark and consolidate financial and social data, to make the industry accountable. Foose explained that in managing these data sets, client protection is of utmost importance. At the platform, members can also find information from member networks, standard setting bodies, investors and financial service providers. ATLAS is managed by MFR under the governance of the sponsors and partner organisations. Foose answered a question from the audience regarding the coverage of the platform: predominantly MFIs and banks, but also peer groups and FinTechs. After this, she introduced the other panellists.

Lucia SPAGGIARI subsequently showed the ATLAS demo-video (accessible at www.atlasdata.org) and exemplified its various features. Various categories of data and benchmarks can be obtained by means of selection frames with indicators and criteria. Clients can thus select a particular portfolio, e.g. benchmarking countries, performance indicators, averages, trends and growth, operational results and compliance.

On a question from the audience regarding definitions used on the platform, Spaggiari answered that qualitative indicators and denominators have been agreed upon by the various actors, to be able to compare and benchmark. The same applies to comparing between financial schemes and financial years; actors have agreed on harmonised principles. On the question how macro and micro data are framed, Spaggiari responded that this much depends on the user making appropriate selections, whether structured or random. Data are validated by making use of various sources of information, with liability scores for the entities reporting, and the data they use. This way, users can rate the reliability and consistency of the data used, also allowing for cross-checking and triangular data.

In addition, the platform is verified by raters and validation panels. One member of the audience referred to previous attempts having eventually failed, for which Spaggiari sees two reasons why the current initiative will work. One is lower costs: due to existing MFR capacities in most countries, data collection doesn’t take much time of colleagues, and the other reason is that so much data has already been compiled that the system is now getting more and more efficient and smart, depending less on subsidies.

The incentive for data service providers to take part is that each of them receives a free benchmark in return. In terms of market uptake, the multitude of reporting tools available through ATLAS allows clients to use their time on more important priorities, such as validation and use of data. In this sense, it is expected that the platform will become the industry standard to manage data and risks, doing more with less money while taking on rapid changes and new challenges (such as banks now taking on microfinance in their portfolio). There are already 3-4 investors who signed up to the system, with the expectation that some more will follow suit.

Jarek CHUCHLA contributed to the dialogue by mentioning that BRS is making use and is promoting a simple Excel-based tool, called the MFI Factsheet, to calculate KPIs. In 2019, they developed another tool for projections and business planning, named Microvision. ATLAS is considered as another important step, where different stakeholders invest in one common system with centralised data, rather than each actor investing in its own system and where MFI Factsheet is a crucial element to provide financial data of the MFIs. He sees much benefit in using ATLAS to respond to reporting needs, and in getting the benchmarking overviews to assess performance.

Bonnie BRUSKY said that with ATLAS the microfinance market will have access to validated data, which will allow for benchmarking. ATLAS’ value addition is particularly strong around pricing data, as subscribers will be able to access product level APR data, as well as important financial ratios and contextual data that allows one to analyse whether pricing is responsible or not. Furthermore, by proposing a standard reporting format for financial data and drawing on the standardised SPI4 format for social performance data, ATLAS is contributing to reducing the reporting burden on both investors and financial service providers.

According to Isabelle BARRÈS, the ATLAS initiative has brought about many valuable lessons. Having one platform by one service provider means that users do not have to deal with so many actors, and, moreover, be able to do much better benchmarking. Continuity will be safeguarded through scaling and quality of information provided, which will help the initiative moving forward. Other more quantitative standards can now be used in ATLAS to obtain more qualitative analyses. Barrès added that the pricing of financial services remains difficult to analyse, because of the different contexts in which they are provided, making it an area to be still benchmarked. Moreover, there are still many organisations to be further analysed and monitored on transparency.

Foose subsequently posed the question to the panellists how often the system and database will be updated. Brusky answered that this will much depend on the participating members updating their data sets, and making these available. CERISE will certainly solicit its members to use and update their data for the benefit of the ATLAS platform and its members.

When asked by the audience whether there will be a user-friendly guide, Spaggiari responded that there will be online training modules and a Q&A section to systemise queries. There are also plans for a user guide on methodologies and various training manuals. Foose stressed that it is important that members actively and continuously help to improve the system, based on user practice. Spaggiari mentioned in this respect that there will be various subscriptions possible; depending on the specific requirements of users to make their decisions, data sets and benchmarks can be more macro or micro. Foose concluded that this differentiation in pricing of the applications however will never compromise the proper management and protection of client information.