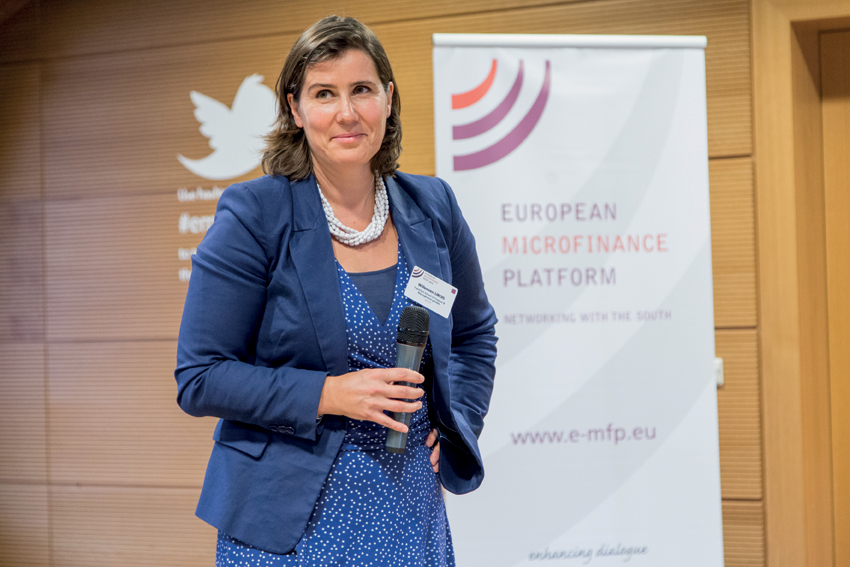 Willemien LIBOIS introduced the topic - lessons learned and good practices in the implementation of microfinance in conflict zones. She called attention to the fact that conflicts occur on a permanent basis all over the world. Libois reminded the audience that individual conflicts have different characteristics and stages, thus requiring diverse approaches from a microfinance perspective. Following Libois' lead, each panellist briefly shared their experiences with microfinance in conflict zones, which was followed by an extensive discussion and interaction with the audience.

Michaël KNAUTE briefly introduced the work of OXUS, a French network of MFIs. He explained that OXUS is currently active in countries such as Tajikistan, Kyrgyzstan, Afghanistan and the Democratic Republic of Congo (DRC), which have experienced or are currently experiencing conflict. Knaute acknowledged that OXUS takes a commercial approach in countries such as Afghanistan and DRC, and that he expects to be challenged on this point during the session.

Major David BESKOW explained that his experience in conflict zones essentially comes from a thirteen-year career in the USA Military, during which he served in countries such as Afghanistan and Iraq. Most recently, Beskow was involved in a Commander's Emergency Response Program in East Baghdad, designed to implement a number of projects, one of them covering economic development. Within this project, micro grants ranging from USD $500 to USD $5,000 were provided for beneficiaries in sectors such as retail, industry and agriculture, funded by both the USA and the Iraqi governments. This project also keeps a dataset on the investment of local funds which can be accessed globally by commanders, and which can contribute to a long-term economic development.

Libois then addressed the panellists with some key questions. Her first question was directed to Knaute, concerning the ethical dilemma of using a commercial approach to microfinance in conflict zones, where populations are most vulnerable. In response to this question, Knaute clarified that the implementation of such activities is not unethical, and that microfinance can be done anywhere. He further explained that conflicts zones also have markets and economic activity, but that it is highly important to carefully select the populations which are served. As such, a diagnostic phase is essential in order to identify areas which are accessible and safe for the staff, as well as to identify the existence of market demand and infrastructure.

Libois' next question was directed to Beskow, revolving around the mechanisms to guarantee that micro grants are put to good use. Beskow clarified that there is indeed an existing concern that the micro grants may not be well spent, which is why potential beneficiaries go through an application process to establish the type of grant. In order to avoid this risk, the existing database of the Coalition Forces is consulted before giving out micro grants. In addition, district councils are directly involved in the selection process, which also guarantees the safety of beneficiaries. The grants also have a follow-up component, where an audit on the use of the funds is conducted toge­ther with Iraqi police forces.

Libois asked Sharaf on the extent to which his institution's social aspect is incorporated into its operational model. Sharaf reacted by reiterating First Microfinance Institution's commitment to carry out its social goals, and that its services and activities are complementing efforts to support sustainable development in Syria. In addition, he explained that operating in Syria always brings an unexpected risk, which is why the MFI adopts certain steps such as proper assessment of clients, branch control on any lending activities and a comprehensive bonus system for the staff. He also mentioned the institution's risk management model which, in coordination with the local team, guarantees the security and accessibility of clients.

Knaute also reacted to Libois' question on how to manage access to grants vs. loans, so as to avoid confusion for clients in conflict zones. He explained that people who need grants are different from people who need loans, which is why Oxus specifically identifies beneficiaries with capacity, skills and potential to re-pay and be a client. Beneficiaries of grants or loans are two separate target groups which should not be confused. 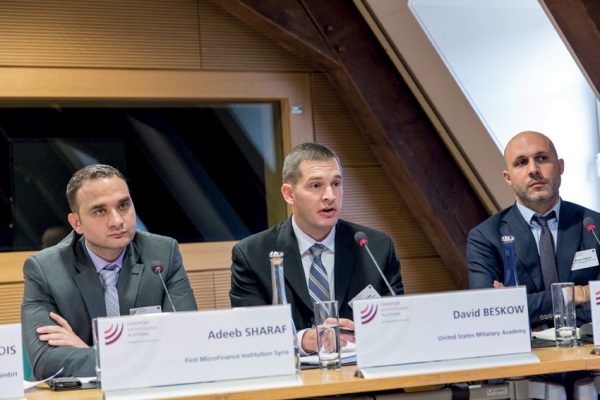 The first discussion point revolved around the perception that conflict zones face dramatic population moves and how that would present an essential shortcoming for microfinance activities. Beskow reacted to this comment by mentioning that, at the time of the project, the population of East Baghdad was not in transit. He also explained that beneficiaries need to be present for at least twelve months to go through a compulsory audit. Knaute then mentioned that microfinance is highly sensitive to major population moves, and further explained that this occurs in very specific contexts, such as natural disasters. In addition, he mentioned that, during a conflict, populations in rural areas move more often than those in urban areas. Sharaf reinforced this point by mentioning that the security situation is better in large Syrian cities, where there are currently no military operations.

Another member of the audience addressed Knaute with the theme of savings, namely on how to convince clients that their deposits are secured with the given MFI. Knaute explained that OXUS is usually seen as a foreign bank, which tends to create client trust more easily. This is especially true in countries such as the DRC, whereas it is more difficult among populations which have had bad experiences with banks, such as in Tajikistan and Kyrgyzstan.

The discussion also showed that microfinance in conflict zones does not offer room for insurance products. Knaute clarified that there is no clear demand for such products, and prices would be too high. Sharaf agreed, and elaborated that clients need more physical products to support them, something which insurances do not offer. In fact, he mentioned that insurance would only be functional to cover loans.

The audience also questioned whether there is any room for investors in microfinance in conflict zones. In his response, Knaute clarified that investor interest varies from country to country. In Afghanistan, for instance, most funds are from public institutions such as the World Bank. As for the DRC, which is a post-conflict area, there are more opportunities for private investors who are looking into diversifying their portfolios.

Libois concluded by emphasizing that the implementation of microfinance in conflict zones presents a number of risks which are essentially operational rather than credit-related. She also mentioned that operating successfully in conflicts zones creates a strong need to understand the market and offer appropriate conditions to the right beneficiaries. As a closing remark, Libois commented that private investors are exceptional in such initiatives, and usually have a social character and long-term vision.

Rich variety of themes and presentations