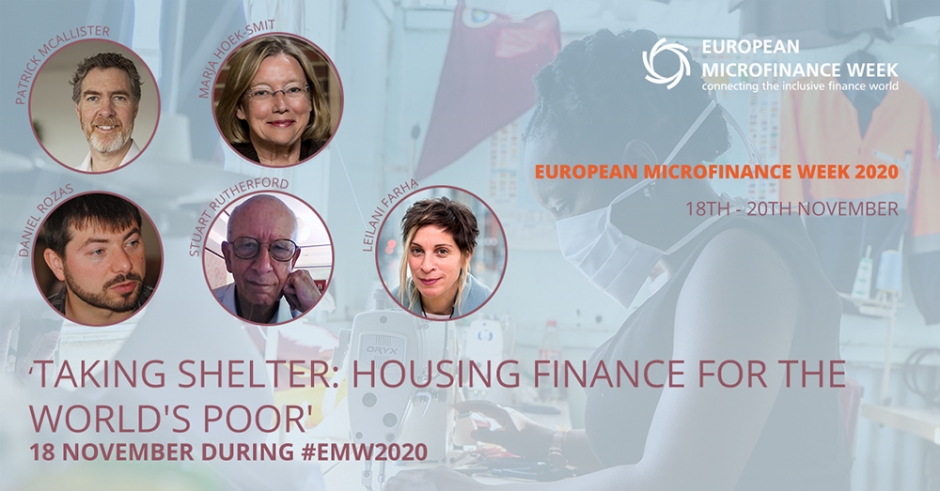 The fireside chat, hosted by Patrick MCALLISTER, took the form of an interview with two of the book's authors: Marja HOEK-SMIT, founder and director of the International Housing Finance Program at the Wharton School of the University of Pennsylvania, and architect Stuart RUTHERFORD, from the Hrishipara Daily Diaries Project. McAllister opened the conversation by introducing both authors and asking Hoek-Smit, author of the first chapter of the book, to share her reflections on the current state of the housing sector and what its main challenges are.

According to Hoek-Smit, not much has changed in developed economies in terms of housing finance. However, there has been a dramatic increase in access to finance in developing countries, not in terms of mortgages, but in terms of consumer finance. This trend is worrying, considering the current need in these economies for a housing finance market. Nevertheless, there has been tremendous growth in awareness of the need to attract more people to home financing. She also noted that there has been a general increase in the understanding by governments and financial institutions that moving down market really pays off. Hoek-Smit added that much more attention has been paid to reaching low-income people and, in particular people with informal incomes. MFIs that already have a housing portfolio are starting to scale up moving towards microfinance for the housing sector. She concluded that this is a positive trend and necessary to move towards a “seamless system” on access to housing finance.

Rutherford mainly agreed with Hoek-Smit’s reflections. He has seen the attempt by MFIs in India to provide mini-mortgages, which helps people not to build an entire house, but parts or additions to it. Rutherford also agreed on the role and relevance of MFIs in this process, as they are much closer to poor people than banks are. In the first chapter of the book, Rutherford shares the story of a woman who was one of the first to join Grameen Bank in the 1980s, and who was later also able to apply for Grameen's first home finance plan. This loan had a tremendous effect on her life, allowing her to turn her home into a more substantial place where she raised her children who went abroad to work, and contributed financially to build a larger and more stable brick and cement home. Rutherford also stressed the complexity of working in this sector and that, unless you really understand the real situation of the poor, you are likely to make mistakes when working with them. The Hrishipara Daily Diaries Project contributed with very rich granular knowledge to the book.

On a second note, McAllister asked the speakers about the connection between the pandemic and housing, and about the capacity of governments to channel financing though housing as a response to COVID-19.

According to Hoek-Smit, Housing is often underestimated in these matters, even though it accounts to 16% of a country's GDP. This shows that the housing sector is key for countries that want to make an economic stimulus due to the recession generated by the pandemic and the effects of the lockdowns. She added that housing generates employment directly in construction, but also in the goods that are used within those houses, as well as all other related activities. Hoek-Smit concluded that countries that make expensive recovery packages, but that don’t focus on the housing sector, will see no return to their efforts to recover the economy.

According to Rutherford, 15% of the people in the Hrishipara Daily Diaries Project receive remittances from abroad and much of that money goes into housing. The effects of COVID-19 on these housing projects has not been too serious, because many of them were already underway when the pandemic arrived. He stated that injecting this money into housing creates many jobs in the local economy. Housing is a key sector and a channel to recover from the pandemic, although the diaries show that most people dealt with the disruption by stopping non-essential expenditure and relying on the reserves of cash that many of them keep at home.

The second part of this plenary session consisted of a conversational debate between Daniel ROZAS, and Leilani FARHA, founder of The Shift and former UN Special Rapporteur on the right to adequate housing.

Rozas started the debate by emphasizing that housing can make a real difference in terms of economic development at the family level, but that this only happens once they are lucky enough to expand it. He added that, with more space and facilities for children to study, and for families to open a business in or from their homes, there is a great increase in the well-being of the household. Based on this, he asked Farha what is the role of MFIs in guaranteeing housing for the poorest.

Farha firstly highlighted that helping households in most need is a major concern and should continue to be so for MFIs. Housing is an expensive asset, but it is also a focal point for life, health, safety, and provides a sense of well-being, especially in the context of the pandemic. She stressed that it is important to guarantee this right to everyone, adding that microfinance is therefore a key leverage point for this right. The microfinance approach understands that people can contribute and act in their own homes. Farha also stated that this is very consistent with a human rights approach, in which people are given priority because they are the ones who know what they need.

According to Farha, the main challenge is defining who is eligible for housing microfinance. This criterion must be consistent with a human rights approach. It is necessary to ensure that there is no discrimination based on gender or other characteristics. Another key challenge is the consideration of equity and the documentation and papers required to certain groups such as indigenous communities. Most of the time, indigenous communities do not have enough documentation for the application processes. This is something that the 2017 European Microfinance Award winner had covered well. The Mexican cooperative solved this problem by taking applicants' labor force into account in the application process. This is an example of how to solve this complexity. The eligibility criteria must always be framed under a human rights standard and this is something that must be implemented at the different levels of the MFIs in order to adequately overcome the current housing crisis.

After Fahra´s reflection, Rozas concluded the session. According to him, the learning from writing this book has been that talking about finance requires looking at the entire spectrum: land, construction, and retail. It is a really complex ecosystem, understanding how families manage cash flows, how providers interact with them, how banks interact with providers, and how government institutions interact with banks is key to having a good understanding of the sector. For all that, this book is a great asset.

Taking Shelter: Housing Finance for the World's Poor is available for purchase from Practical Action Publishing or your favorite booksellers - in softcover, hardcover and e-book formats.