[Panel session] The impact of Covid-19 on agri-finance 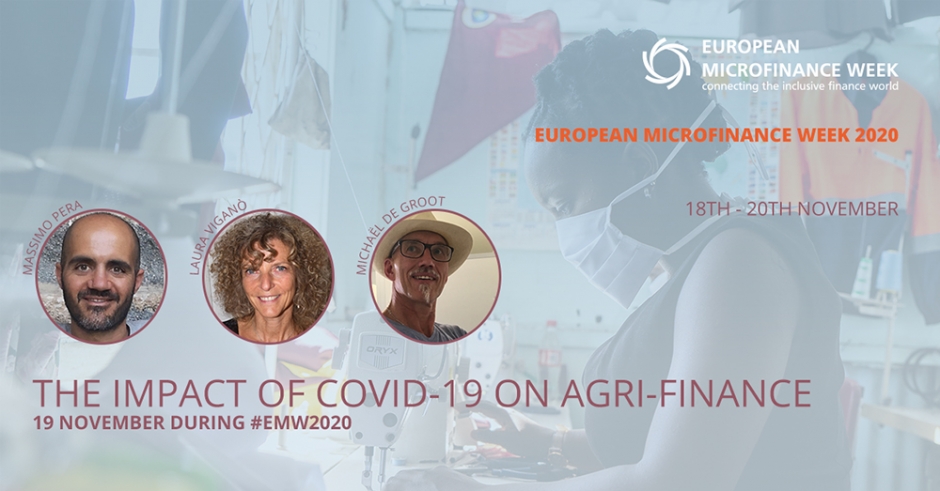 At the time of EMW 2020, the coronavirus had infected over 50 million people worldwide while climate change and low prices had impacted approximately 12.5 million farmers and more than 100 million people connected through the supply chain. Laura VIGANÒ explained that the impacts of the two threats are compounded, and that the risks to the world’s most vulnerable communities are increasing exponentially. She asked the panellists to share their knowledge on farmers’ reactions and their perspectives on the required response and the roles of different stakeholders.

Massimo PERA explained that the COVID crisis had different effects on staple foods and high-value products. In general, staple food production is less capital intensive and the impact of the crisis was minor. In contrast, the impact on high-value products was huge, as production and trade slowed down. The impact on the perishables sector was particularly large, as logistical problems caused major losses. Products such as fresh vegetables and fresh milk could not be brought to the market and small dairy farmers that could not keep their milk fresh had to throw it away.

Michaël DE GROOT illustrated the impact of the crisis with an example of the coffee sector. Due to the lockdowns imposed by governments, food service providers closed down and consumers started drinking coffee at home. As total coffee consumption remained high, coffee producers could still sell volumes. However, the quality purchased for home consumption is different than for food service providers and the difference meant that coffee producers fetched lower prices.

Increased food prices were another effect that hit vulnerable people particularly hard. According to De Groot, food prices increased in other countries as governments closed their borders in an attempt to secure food for their own population. Although such measures initially had the desired effect and reduced food prices, subsequent limited availability of foreign exchange caused prices to increase again.

In Kenya, a survey by 60’Decibels among 500 farmers showed that farmers had difficulty to reach input suppliers and markets to obtain price information and sell their products, explained Pera. The farmers reported a 25 percent loss of income, which increased their vulnerability. To illustrate, farmers bought lower quality food to reduce their expenditures, which affected their nutrition. The results of the survey explain why many of the most vulnerable people are more concerned about financial impacts of a lockdown than they are about the potential impact of COVID on their health.

Audience member Nadia OURIEMCHO remarked: ‘Based on surveys conducted among MFI clients, it appears that rural clients and more specifically producers were less affected by COVID than others and we have observed less default in agriculture loan portfolio’. Pera responded that long-term effects of the crisis on agriculture loan portfolios may not be visible yet for two reasons. Firstly, long-term agriculture loans respect seasonalities and a full year from the beginning of the crisis would have to pass to know the performance of the loans. Next to that, many MFIs placed a moratorium on loans, deferring payments and potentially losses.

Alexandra SANCHEZ, also a member of the audience, wrote that her organisation in Indonesia managed to facilitate distance communication in the value chain via a mobile phone app. She wondered if there are other similar initiatives. De Groot responded that many MFIs in Africa use mobile apps, which are helpful tools to deliver financial services to their clients. Unfortunately, a large group of digital illiterates is excluded from these services.

De Groot then turned to the effects of the crisis on the supply of lending. He expected that funders would generally become more risk averse, and that this would reduce access to finance for the agricultural sector. Nonetheless, social investors can help out with loans to solve short-term liquidity issues of MFIs. Besides these MFIs, agri-input suppliers and cooperatives can play a role in the provision of financial services to farmers by providing more products and services on credit.

Pera provided a development organisation perspective on crisis management through policy advice. He suggested three levels of interventions. Firstly, there is a need to increase emergency food assistance. Secondly, there is a need to support smallholders to enhance productivity and use technological solutions such as e-commerce platforms. Thirdly, key bottlenecks such as logistics must be addressed to keep the sector operational. De Groot remarked that technological solutions are often highly expensive and of limited relevance for smallholders themselves, and that e-commerce is only relevant for some high-value products such as premium coffee and cocoa. In his view, financing storage solutions for agricultural products and especially perishables and financing climate resilient production systems will be more effective to help the agricultural sector recover from the crisis.

Pera argued that the current crisis is not related to COVID, but also exposes imbalances in global food systems. Climate change impacts some producers more than others and, while 100 million people suffer from hunger, another part of the population is overweight. Policy incentives such as fiscal regulations can promote the improvement of food systems. Investments in food systems should be accompanied by sustainability requirements. De Groot agreed that the sustainability impact of investments should become part of the lending criteria of banks.

Eliseo CARRIÓN then asked the panellists to share their views on a different topic. “Will the impact of the crisis on the demand and the constraints in supply chains (for example, adaptation of the whole logistic process) lead to growth of cooperatives/associations in terms of membership, considering that cooperatives connect small farmers with the whole value chain and that the association rate of small farmers is still very low in some countries?” De Groot believed that there is renewed interest in cooperatives, partly facilitated through digital platforms, and that these organisations can play an important role in making regions more self-sufficient, which is particularly valuable to producers when crises disrupt international markets.