Opening plenary 'Institutional resilience in focus: What is the current state of the sector?' 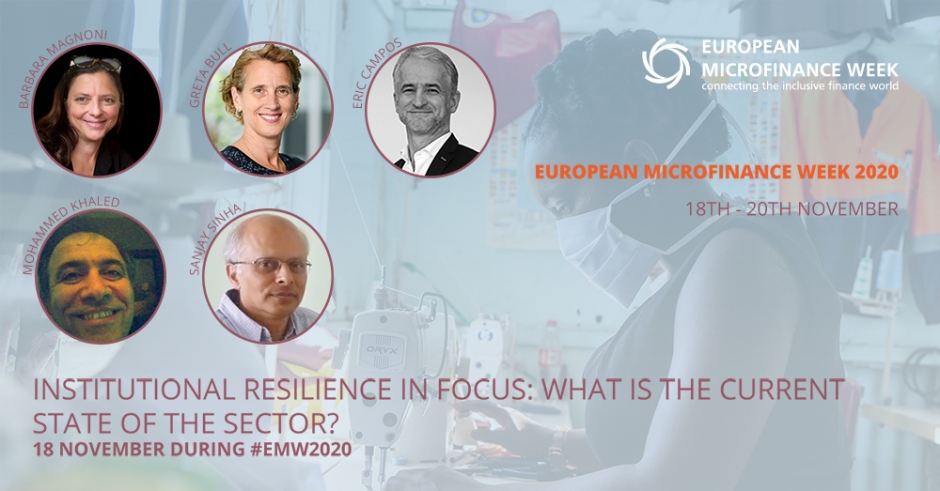 Barbara MAGNONI opened this first Plenary of the EMW 2020, in which the expert panel discussed examples of FSPs that have struggled, survived or prospered over the past months. The liquidity crises within MFIs that were initially feared have not materialised to the extent that was expected. It was on this note that Magnoni spoke of resilience in the sector, and introduced the rest of the panel.

Greta BULL elaborated on the support that CGAP had provided in the past months, by gathering data to assess and manage risks, and carrying out surveys among MFIs. CGAP has also engaged in discussion with funders of MFIs to understand how they are supporting the sector. There is much that is as yet unknown due to debt payment moratoria in many markets. The concern is no longer about liquidity, but rather about solvency. As moratoria are lifted, we will know more about where payment problems are arising. Many MFIs are making a shift towards more digital services in response to the pandemic. CGAP is developing resources for the industry on both crisis management and digitization.

Eric CAMPOS explained that Grameen did regular FSP surveys from March to November 2020, as they also sensed panic amongst lenders. The surveys Grameen conducted among MFIs showed a strong resilience of MFIs, and did not detect serious liquidity issues during the COVID-19 crisis. He believed this was due to internal adaptation of MFIs, and good coordination of lenders accepting a first wave of rollovers with an average of six months, expecting a possible second rollover. The risk is still there in the portfolio of MFIs, even six to seven months later. Campos expects a kind of ‘new normal’, in which services will be more digital, and more geared towards investments in the agricultural sector. Before COVID this was said to be a risk-sector, and will need to be accompanied by more financial education.

Sanjay SINHA, from M-CRIL, referred to the situation in Asia, and trends for the short and longer term. M-CRIL had analysed liquidity and portfolio quality patterns before and during the COVID-19 crisis in five Asian countries. Sinha said the situation could lead, at least in India, to portfolio risk ratios of the order of 20-24 percent. He expects the sector to need about four to five years to recover on the back of huge write offs and recapitalisation by investors. He thought that the sector may not come back to the 1-2 percent levels of portfolio risk reported by MFIs before the pandemic. Following this liquidity analysis, there is concern about the levels of recapitalisation that will be necessary, and how deep the debt restructuring will need to go to revive the microfinance sector.

Mohammed KHALED, from IFC, countered to be a bit more optimistic; now six to seven months in the crisis the situation appears not as bad as expected. MFI portfolio risk went up but not to level that was feared. Postponement of repayments has remained quite limited; some countries experienced more liquidity issues than others, but not to a serious extent. He confirmed the need for digitalisation, and at the same time emphasised that we should not stress the risks during the crisis too much, as this may have an adverse effect on the realities on the ground.

Triggered by Magnoni on the issue of resilience, Sinha referred to the factor of good management to deal with the crisis; some MFIs operate rather on a month-by-month basis. Khaled disagreed with that observation, stating that what is happening with some of the MFIs was already due to flaws in their system. Those with a right system and governance manage to steer away from the crisis and still grow.

Magnoni subsequently questioned the panellists about some of the underlying patterns they had noticed. Sinha and Khaled responded that it depends quite on the size of operations and how much the clients have been affected by the crisis. As a response most MFIs are working hard to manage liquidity and portfolio composition; some MFIs are better than local banks.

Bull found it difficult to speak of MFIs in general; some are quite sophisticated, almost operating like banks and very good at risk management. Others are struggling with even basic reporting, due to sub-optimal data and systems, and need to better understand their portfolios, for which they require better analytical capabilities.

On the question of whether operations managed by women make a difference, all panellists mentioned not to have noticed particular differences, while Bull said that data are simply lacking.

When Magnoni asked about possible optimism regarding resilience and recovery, Bull answered that it is too early to tell, and that we are not yet ‘out of the woods’. We are also not in the driver’s seat, and not sure of what is next for the sector to absorb, even if so far it bounced back well.

Further challenges are still foreseen in digitalisation. Sinha pointed out that the smart phone is still considered by many MFIs to be a black box. While the level of charges is an issue for many of the poorest MFI clients, the lack of digital literacy means there is the risk of excluding these low income potential customers if we move too fast in digitising the MFI-customer interface. There is a need, therefore, to enhance ongoing efforts to enable digital literacy along with the digitisation of MFI processes.

Khaled confirmed that MFIs indeed must serve their customers, and strike a balance between costing and charges.

Magnoni concluded with cautious optimism, and thanked the panellists for their contributions.