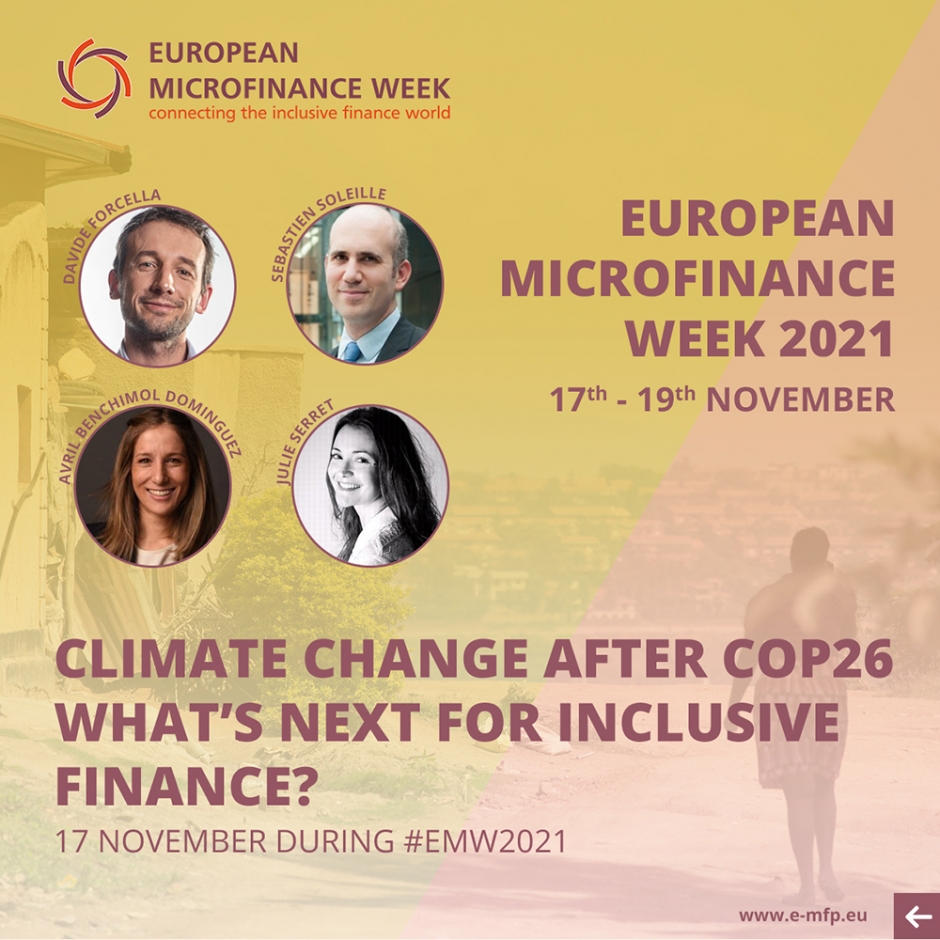 David FORCELLA opened the plenary by introducing the panellists and the main topic of the session. He highlighted the diversity of the panellists and how it would contribute to a rich discussion on how they can join forces to overcome the challenges that climate change poses for the inclusive finance sector.

Forcella started his introduction by highlighting how climate change has become a material, long-lasting and transversal problem that is affecting mainly the most vulnerable communities in the world. Over the last decades, an increase in both the costs and casualties of natural disasters has been observed. The unequal effects of climate change are mainly being felt by the most vulnerable. Climate change has evolved into a social and financial risk that is affecting each financial and economic transaction. These environmental risks are indeed financial risks, however, financing for adaptation is still among the fewer uses of climate finance.

According to Forcella, there is a strong need for a social, cultural, and economic transformation of the financial system as it does not reach the people that need it the most. Existing finance for vulnerable communities is not enough and finance for climate adaption is still a small percentage in comparison to mitigation and dual benefit.

However, there are solutions and a path ahead. A good example is the European Microfinance Platform Action Group for Green, Inclusive, and Climate Smart Finance and the development of the Green Index 3.0. The Green Index 3.0 is a tool that allows the financial sector intermediaries to assess their performance in environmental finance and in particular including the identification of vulnerabilities to climate change. Nonetheless, this is not enough, and the main aim of this panel was to discuss what’s next for inclusive finance after the recently held COP26.

Based on their recent experiences at COP26, the panellists shared their views on the key challenges that arise in the interaction between climate change and inclusive finance:  how to mainstream resilient and sustainable inclusive finance, how to ensure synergies between the public and private sector and which should be the way forward for inclusive finance.

The first panellist that shared her views on the topic was Avril BENCHIMOL DOMINGUEZ, from the Global Environmental Facility, GEF. Over the last the 30 years, GEF has supported more than 5,000 projects that tackle environmental problems. During this period, the facility has contributed to the mobilisation of more than 117 billion dollars. However, and as stated by Benchimol Dominguez, we are still very far from solving the climate crisis. COP26 brought good and bad news. The good news included: the improvement or enhancement of the Net Zero targets, the China-USA bilateral agreements on emission reductions (they both represent 40% of global emissions) and the Glasgow Finance Alliance announcement on a 100 Trillion Dollars support for economies that are transitioning to Net Zero economies. As a reaction to Forcella’s introduction, Benchimol. Dominguez acknowledged that most of MFIs are aware and share a view on the severity of the climate crisis and its associated environmental and financial risks. MFIs are willing to transform this challenge into an opportunity. On their side, GEF is looking to an integrated approach to solve the environmental crisis. According to GEF, the main challenges they see in terms of finance for climate adaptation are: measurement, access and no common understanding on what adaptation means and entails.

For IFAD, it was their first time exhibiting at COP26 with a pavilion. Their main objective being there was to mobilise adaptation finance to small scale farmers and highlight IFADs leadership on adaptation. According to Jani ROUX there is a clear need for stronger leadership on climate adaptation. During her presentation she also introduced IFAD’s programmes for adaption for agriculture smallholders ASAP and ASAP +. IFAD’s successful programmes aim to support agriculture smallholders with $US1.4bn for projects on climate finance.

Julie SERRET, from the Grameen Crédit Agricole Foundation (GCAF), highlighted that during COP26 microfinance was quite absent. This is of concern as microfinance plays a key role for climate change mitigation and adaption, especially for the most vulnerable population in rural areas. It remains a challenge for future editions of this international gathering to bring focus on the role of microfinance and integrate it as a solution to fight climate change. Julie SERRET also mentioned the GCAF’s various initiatives regarding environmental topics, with a particular focus on the GEF project won by the GCAF in collaboration with YAPU Solutions. This project aims to leverage public and private finance to increase resilience for the most vulnerable –small-scale producers and rural communities– and support climate change adaptation and biodiversity conservation.

Beyond the impressions of COP26, panellists agreed that there is a strong need for partners and partnerships to take a holistic and blended approach on the role that inclusive finance has in fighting climate change. Structural public-private partnerships that go beyond specific projects or programmers are key to make money reach those most in need. Benchimol Dominguez stressed the current need for policy coherence and internal collaboration between ministries (of environment and finance) where investments for climate change adaptation and mitigation are taking place. She also stressed that blended finance is a key tool to build a track record and understand the returns of investing in resilience and climate change adaptation. This track record can help the future development of structural public-private partnerships as they provide relevant data on the success of these projects.

Soleille reacted mentioning that there is a strong preference in the private sector to partner with local public institutions. Public partners can often contribute with the knowledge needed to build successful resilience and climate adaptation programmes. In order to implement blended finance projects a collaboration with public institutions is certainly needed.

Structuring public partnerships and a clear leadership on finance for climate adaptation is still lacking as was agreed and observed by Roux from IFAD. Overcoming this challenge will be key for the role of inclusive finance in climate change adaptation, mitigation and resilience.

It remains not only a challenge but also a great opportunity to move forward to work on stronger collaborations and partnerships between the private and public sector to mainstream resilient and sustainable inclusive finance.