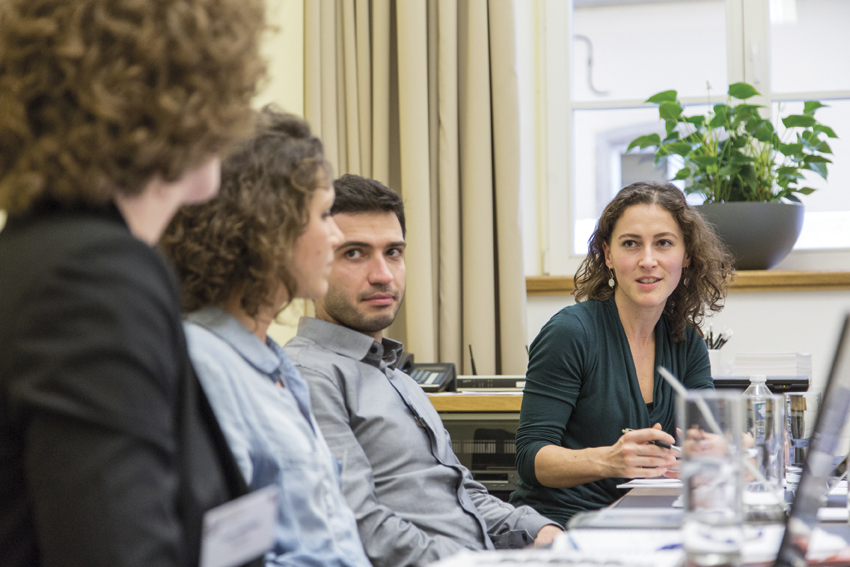 Azalea CARISCH welcomed the audience and introduced the e-MFP University Meets Microfinance Action Group. Carisch also reflected upon the theme of this year's Microfinance Week, ‘Developing Better Markets', reminding the audience that the concept is much related to information and the ability to analyse. Carisch mentioned that the increasing focus on the client encourages the microfinance sector to look more closely at its institutions, and how they are collecting and using information to benefit their target group. She emphasized that better collection of data at the client level serves a multitude of purposes, including the improvement and affordability of products, as well as the mitigation of risks to MFIs and clients.

Hayyan ALIA, winner of the UMM Award for his PhD article, was the first presenter. Through the approach of financial diaries in Egypt, Alia brought in a different perspective on how to measure the impact of microfinance. He explained that impact evaluations in microfinance are typically conducted through qualitative and quantitative approaches, where the former focuses on the process (i.e. how microfinance changed the client's life) and the latter focuses on the attribution problem (i.e. is there statistically an impact of microfinance on the client?). Alia then explained how he dealt with the challenges posed by these approaches: fungibility of money and absence of formal records. Regarding overcoming the problem of fungibility of money, he explained the utility of using of the 1996 Household Economic Portfolio (HEP) model and his simplification of this model by focusing on the economic aspects and the interactions between the three types of capital. As for the absence of formal records, he pointed out that using diaries is a very good solution even if the financial diaries have been historically criticised for providing only anecdotal evidence and for not being able to redraw complete economic portfolios of the diarists. By combining financial and time diaries in his 14-day research in Cairo, Alia overcame this challenge. Despite admitting that the approach has limitations in terms of costs, data analysis and categorization of activities, Alia highlighted its valuable contribution to microfinance by developing impact evaluation tools, providing in-depth information on the economic-value creation mechanisms for the poor, increasing awareness of the poor and helping donors and investors understand impact.

Mathilde MAITROT presented the results of her PhD research, dealing with microfinance in rural Bangladesh. As a starting point, Maitrot addressed the role and operational challenges of MFIs, acknowledging the risk that they might embark on a ‘mission drift'. She then proceeded to introduce the microfinance market in Bangladesh which, despite the scandals in recent years, remains resilient and dominated by 3 to 5 MFIs. In this context, Maitrot presented the methodology of her research, focusing on how organizational structures and management systems channel social performance. Maitrot specifically shared her findings about ASA, praised as being one of the most commercially-successful MFIs in Bangladesh. She observed that ASA is highly centralised in terms of strategic thinking, but its branches are self-sustaining. Maitrot also explained that the staff does not receive any formal training from the head office, which is only done informally by colleagues, and that priority is given to financial performance. She elaborated that, in a context where both clients and MFI officers are under the pressure of financial performance, malpractices are widespread. Maitrot acknowledged that the significance of these findings are very contextual, and that these malpractices are not limited to ASA, but defended that the research reveals how much institutions invest in their own staff to achieve both financial and social missions.

Laura GÄRTNER, from Oikocredit, brought in the practitioner's perspective to the panel, focusing on the collection and use of client data. According to Gärtner, these data are very important to MFIs in achieving their social mission, understanding clients' needs, developing new products and managing risks. She also emphasized that this information is essential for Oikocredit to achieve its social mission, measure impact, report to investors and learn as an organisation. Gärtner mentioned that Oikocredit participates in two research streams with different partners: 1) research institutes and participation in impact studies and 2) local partners. The focus of the presentation was the latter, composed of two branches: a) setting up client outcome systems and b) supporting partners in client outcome tracking.

Gärtner further elaborated on the support to MFIs which collect client data (but no panel data) in setting up client outcomes systems (i.e. monitoring changes and training); she used the examples of two MFIs in India which collected a significant amount of data without properly using it to track client changes. In addition, Gärtner elaborated on the support to MFIs with strong panel data tracking clients over time, but without proper data analysis and use. She illustrated the support to partners in client outcome tracking by using the example of the Progress Out of Poverty Index (PPI) Capacity Building project. According to Gärtner, the PPI was very successful in measuring poverty outreach, but she also acknowledged the difficulties for MFIs to track PPI over time.

In an example from the developed world, Riccardo AGUGLIA introduced the work of the European Investment Fund (EIF), which provides financial services to MSMEs in Europe. Aguglia explained that MSMEs are an important segment in Europe, where 92% of the enterprises are micro and 99% of all start-ups are micro and small. In this context, microfinance is used as a tool to create employment across Europe by improving the availability of finance for micro-entrepreneurs, the self-employed and vulnerable groups. In the framework of microfinance, EIF implements a social performance measurement at two distinct phases, i.e. investment and implementation. At the investment phase, a value-added assessment is conducted at the market and MFI levels. At the implementation phase, an evaluation of the activities is carried out to measure their actual development and impact. The methodology consists of steps such as setting social objectives and monitoring & assessing progress. The EIF also works in the framework of the SPTF Universal Standards for Social Performance, abiding to principles such as client protection, while most of governance, client monitoring and responsible financial principles are included in the very advanced regulatory framework applied in western countries compared to developing countries. Aguglia concluded that microfinance is crucial for the development of a cohesive and inclusive Europe. 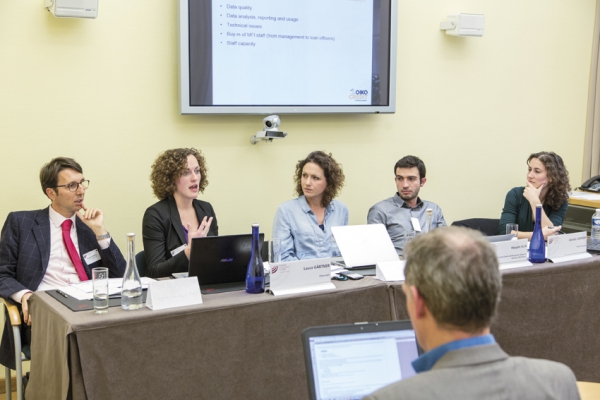 The first discussion point revolved around the topic of client re-payment rates, where a member of the audience asked for a comparison between Europe and developing countries. Aguglia explained that the European microfinance market can be segmented into Western and Eastern Europe, where Eastern Europe has large and well-off MFIs with a good re-payment schedule. He elaborated that, in Western Europe, there is a general confusion between social policies, grants and microfinance, which prevents the sector from becoming sustainable.

The audience also questioned the panellists on the problems of using social indicators. Maitrot pointed out that we are looking at the wrong indicators. Instead of looking at repayment rate, for instance, we should focus on the number of clients who have successfully left the MFI. On this note, Gärtner commented that Oikocredit is collecting other indicators which do show social performance. This is done through tools such as the scorecard for social performance, used by Oikocredit. She also mentioned that retention rate can be a good indicator as well.

In a brief wrap up, Carisch acknowledged that further research needs to be conducted at the client level and, in this regard, should focus on the topic of social performance measurement and management should be given to the institutional operations of MFIs.