Exiting responsibly: the case of Sathapana 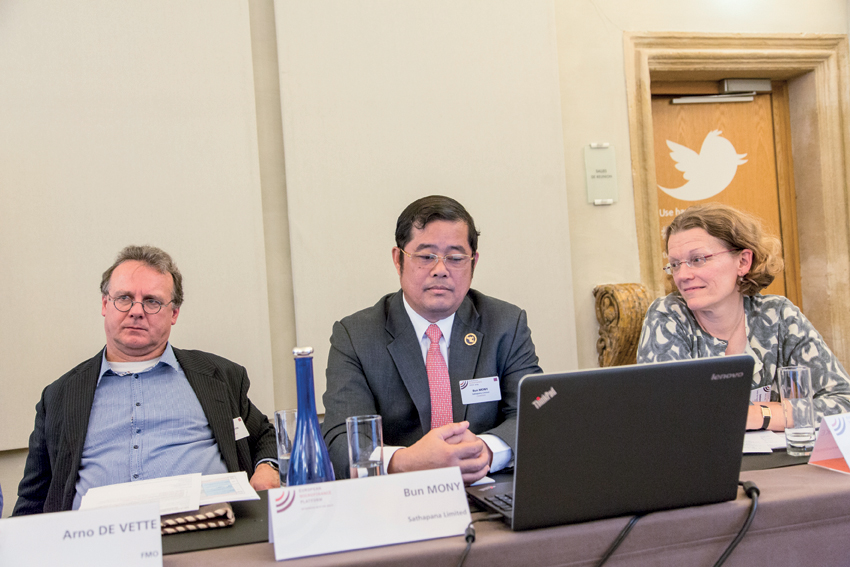 Deborah DRAKE introduced the subject and panellists; the CEO and Founder of the MFI (Sathapana), the selling shareholders (FMO and Triodos) and the financial intermediary (Enclude). The case of Sathapana was presented to discuss how investors can responsibly and successfully exit from an investment in an MFI operation.

Dr Bun MONY explained the background and history of Sathapana: from Cambodia Community Building in 1995 to Cambodian Entrepreneur Building in 2003, to Sathapana Ltd. in 2008. Initiated for basic financial services for the poor, MFI Sathapana really took off after 2009/10 (when it obtained a Microfinance Deposit Taking License from the National Bank of Cambodia, NBC), being very successful in public deposit mobilisation. As the institution performed well and grew over time, it raised the question whether to remain as an MFI or to transform into a bank. Key was the intention to stay with their original mandate and vision of providing access to financial services for people in a sustainable manner, but with a larger national network.

Since the moderator wished to have much time for debate, the introduction was kept short and was followed by a key question - why had FMO and Triodos wanted to exit. Arno DE VETTE of FMO explained that after 6-7 years of involvement, and having more than USD $100 million in assets in Sathapana, it meant that it was time to plan an exit strategy with Triodos. Rita DE BOER confirmed that the reasons for the initial investors to exit were not exactly planned, but emerged from reaching fund concentration limits in Sathapana. The timing was right, as the MFI was performing well and there was still time before the next financial injection would be required. The two sellers agreed that it would be important to determine and align the price expectations, as well as to identify the criteria that would be considered for a suited buyer (preferably from the region, and with banking and microfinance experience to support the growth strategy of Sathapana going forward). De Vette explained that after the initial decision and agreeing with Triodos, they went back to Mony to discuss the plans to exit and align ideas, also with the Central Bank. They discussed and came up with a list of ten potential investors. They then engaged Enclude to guide the process.

Stephanie GARCIA VAN GOOL continued that their main task was to make the process as swift and easy as possible for all stakeholders involved and to manage expectations. They structured and managed the process in a two stage auction process and pre-agreed a timeline, drafted process letters and marketing materials to bring interested parties to the table (both inclusive finance and mainstream players). At first, indicative offers were received, followed by due diligence, to finally receive binding-offers.

De Boer stated that while Triodos and FMO (jointly owning approx. 38% of the shares) had informed Sathapana and other shareholders that they wished to sell their shares, during the due diligence process this intention was formally announced. At that point some of the other shareholders indicated their interest in joining the transaction, thus potentially resulting in a much larger stake on offer (i.e. a majority stake). As a result, the process slightly changed as they now looked for potential bidders who would be interested in potentially acquiring a larger stake. De Vette noted that throughout the process, potential buyers consulted with the Central Bank.

According to De Vette, at the binding stage, FMO and Triodos revised the binding offers' content to reflect the interest of buyers for a larger stake on sale (as it remained unclear if fellow shareholders would join). Ultimately, in their offers, potential buyers proposed different price ranges for different packages of shares. This surprisingly resulted in receiving some attractive bids overall. Garcia Van Gool mentioned that it was not as easy as it might appear; shareholder expectations needed to be managed carefully.

Eventually, Maruhan Japan Bank Plc was selected - following due diligence it was revealed that they had a strong vision, had already invested in Sathapana, supported the vision to become a bank and wanted to keep the current management in place. In addition, they were already involved in banking in Cambodia, and in that sense were known to the Central Bank.

The quality of the offers and the sale process were ultimately reflected in the fact that all remaining shareholders decided to join the process, resulting in the successful sale of a majority equity stake of 95.1% to Maruhan Japan Bank, with a put/call option also arranged for the remaining equity held by the founding NGO. Transparent communication and information between the partners was a crucial factor for success. According to Garcia Van Gool, ‘it never ends up the way you plan; there are many intervening factors'. The pragmatic approach resulted in a friendly and short exit process, with a good return on investment, with all debt providers maintaining their funding and the preservation of good relationships with the shareholders, MFI, regulator, etc., even after the deal was closed. To conclude, Garcia Van Gool presented a framework for a responsible exit, ‘Defined at entry, Demonstrated at exit'.

Mony emphasized his appreciation of the good guidance by the three partners. It was a completely new experience for a financial institution in Cambodia, having grown out of a period of conflict with rather modest means.

Deborah Drake posed the question whether this transaction was an exception to the rule or easy to replicate as an exit model. According to De Boer, informing all stakeholders, sharing experiences, and a proper selection process, all contributed to a successful exit. Mony added that in this case the offer to local shareholders was interesting. Garcia Van Gool pointed out that it is difficult to set a standard but one can define certain "best practices" . Other contributing factors to the responsible exit were: proper administration of documents, no mission drift, and the right selection criteria defined at the outset.

A participant from the audience wanted to know more about the short or long term involvement of FMO and Triodos in such schemes. While FMO mostly invests for a long period, with no pre-defined exit strategy, Triodos typically intends to stay in for seven years with an option to prolong (not confined by external funders). Rabobank (Asia department) wanted to know more about the rationale to sell the majority of shares. This was answered as being more coincidental than pre-designed. Given the offers on the table and having been invited to participate in the selection process, the other shareholders saw the opportunity to be included in a transparent equity sale process which resulted in a more extensive and lucrative offer. In other cases this is often more complex.

On the question by KWF on whether or not the returns on the investment met the sellers' expectations of responsible returns, De Vette replied that the returns were good and all stakeholders were happy with the outcome. De Boer added that the price is generally higher when a majority stake is sold, so it was in reasonably beyond preliminary ("minority stake price") expectations. According to Mony, it was also good timing, in terms of the financial and operational performance of Sathapana. Concerning the due diligence process, as asked by Cerise, Garcia Van Gool responded that there had been five thorough on-site due diligences and a complete online data room to allow investors to access information 24/7.

Finally, De Boer referred to the selection criteria going beyond price and stake in terms of the sale; in particular, it included aspects such as mission alignment availability of the buyers' financial resources, management feedback, and the recommendation from the Central Bank. Mony concluded by saying that the operational and strategic complementarity of Sathapana and the buyer was crucial.